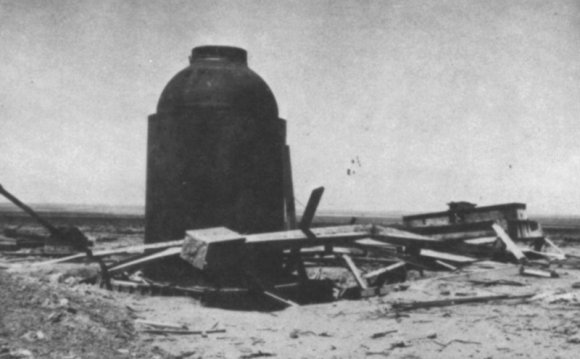 The birth of nuclear weapons occurred on July 16, 1945 at the Alamogordo Bombing and Gunnery Range in New Mexico, 230 miles south of Los Alamos. Gadget (as the bomb was known) was an implosion plutonium bomb, like the one used at Nagasaki, and detonated with 20 kilotons of force, slightly more than the Little Boy bomb dropped on Hiroshima. Originally the test was to occur at 4 a.m., but it was delayed to 5:30 after an early morning thunderstorm. At 5:29:45, Gadget exploded and the Atomic Age began.

News of the success of the Trinity test, as it was named by Oppenheimer himself, was initially limited to those Manhattan Project scientists who already had knowledge of the atomic bomb, despite the fact that the explosion was felt in cities throughout the state. Officially, the cause was reported as the accidental detonation of a bunker containing a number of high explosives and pyrotechnics. Only after the atomic bombings of Japan was Trinity's true nature made known.

The explosion annihilated nearly all of the 100-foot metal tower from which the bomb was dropped and created a crater of a radioactive green glassy substance known as trinitite, which is today prized as a collector's item. Radiation levels at the site remain about 10 times as high as natural background radiation. After being closed to the public for many years, the Trinity site was declared a National Historic Landmark district in 1965 and was listed on the National Register of Historic Places in 1966. It is now open to visitors on the first Saturdays of April and October.