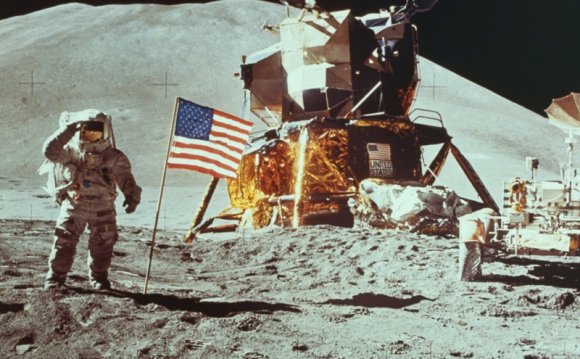 Listen to this story (requires RealPlayer)

"Tony!" she exclaimed, "I just came from the coffee shop and there's an [adjective omitted] man down there who says NASA never landed on the Moon. Everyone was talking about it ... I just didn't know what to say!"

That last bit was hard to swallow, I thought. Mom's never at a loss for words.

But even more incredible was the controversy that swirled through her small-town diner and places like it across the country. After a long absence, the "Moon Hoax" was back.

Above: Astronaut Buzz Aldrin on the surface of the Moon in 1969. [more information]

All the buzz about the Moon began on February 15th when Fox television aired a program called Conspiracy Theory: Did We Land on the Moon? Guests on the show argued that NASA technology in the 1960's wasn't up to the task of a real Moon landing. Instead, anxious to win the Space Race any way it could, NASA acted out the Apollo program in movie studios. Neil Armstrong's historic first steps on another world, the rollicking Moon Buggy rides, even Al Shepard's arcing golf shot over Fra Mauro- it was all a fake!

Fortunately the Soviets didn't think of the gag first. They could have filmed their own fake Moon landings and really embarrassed the free world.

Shows like Conspiracy Theory ought to be as tongue-in-cheek as they sound. Unfortunately, there was an earnest feel to the Fox broadcast, enough to make you wonder if the program's makers might have fallen under their own spell.

According to the show NASA was a blundering movie producer thirty years ago. For example, pundits pointed out a seeming discrepancy in Apollo imagery: Pictures of astronauts transmitted from the Moon don't include stars in the dark lunar sky - an obvious production error! What happened? Did NASA film-makers forget to turn on the constellations?

Most photographers already know the answer: It's difficult to capture something very bright and something else very dim on the same piece of film - typical emulsions don't have enough "dynamic range." Astronauts striding across the bright lunar soil in their sunlit spacesuits were literally dazzling. Setting a camera with the proper exposure for a glaring spacesuit would naturally render background stars too faint to see.

Here's another one: Pictures of Apollo astronauts erecting a US flag on the Moon show the flag bending and rippling. How can that be? After all, there's no breeze on the Moon.

Not every waving flag needs a breeze - at least not in space. When astronauts were planting the flagpole they rotated it back and forth to better penetrate the lunar soil (anyone who's set a blunt tent-post will know how this works). So of course the flag waved! Unfurling a piece of rolled-up cloth with stored angular momentum will naturally result in waves and ripples - no breeze required!

The Fox documentary went on with plenty more specious points. You can find detailed rebuttals to each of them at BadAstronomy.com and the Moon Hoax web page. (These are independent sites, not sponsored by NASA.)

The best rebuttal to allegations of a "Moon Hoax, " however, is common sense. Evidence that the Apollo program really happened is compelling: A dozen astronauts (laden with cameras) walked on the Moon between 1969 and 1972. Nine of them are still alive and can testify to their experience. They didn't return from the Moon empty-handed, either. Just as Columbus carried a few hundred natives back to Spain as evidence of his trip to the New World, Apollo astronauts brought 841 pounds of Moon rock home to Earth.