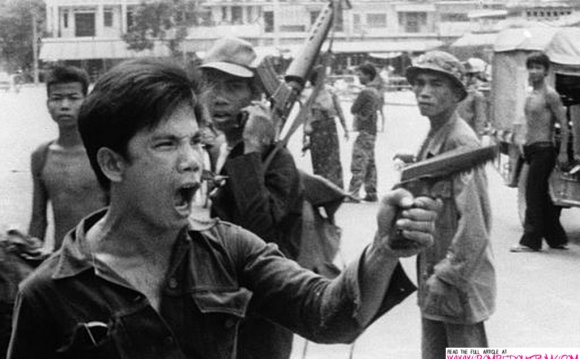 The Cambodian Genocide refers to the attempt of Khmer Rouge party leader “Pol Pot” to nationalize and centralize the peasant farming society of Cambodia virtually overnight, in accordance with the Chinese Communist agricultural model. This resulted in the gradual devastation of over 25% of the country’s population in just three short years.

Cambodia, a country in Southeast Asia, is less than half the size of California, with its present day capital in Phnom Penh. In 1953, Cambodia gained its independence from France, after nearly 100 years of colonialist rule. As the Vietnam War progressed, Cambodia’s elected Prime Minister Norodom Sihanouk adopted an official policy of neutrality. Sihanouk was ousted in 1970 by a military coup led by his own Cambodian General Lon Nol, a testament to the turbulent political climate of Southeast Asia during this time. In the years preceding the genocide, the population of Cambodia was just over 7 million, almost all of whom were Buddhists. The country borders Thailand to its west and northwest, Laos to its northeast, and Vietnam to its east and southeast. The south and southwest borders of Cambodia are coastal shorelines on the Gulf of Thailand.

The actions of the Khmer Rouge government which actually constitute “genocide” began shortly after their seizure of power from the government of Lon Nol in 1975, and lasted until the Khmer Rouge was overthrown by the Vietnamese in 1978. The genocide itself emanated from a harsh climate of political and social turmoil. This atmosphere of communal unrest in Cambodia arose during the French decolonization of Southeast Asia in the early 1950s, and continued to devastate the region until the late 1980s.

Cambodia, a Southeast Asian country less than half the size of California, was the center of the ancient kingdom of Khmer with its capital city Angkor. Cambodia gained its independence from France in 1953, after nearly 100 years of colonial rule. Power was given to Cambodia’s Prince Sihanouk but in 1970, he was deposed in a military coup led by his own Cambodian Lieutenant-General Lon Nol, a response to the turbulent political climate of Southeast Asia during this time. Lon Nol was made president of the new Khmer Republic while Prince Sihanouk and his loyal followers joined forces with a communist guerilla organization known as the Khmer Rouge. Soon after, civil war in Cambodia began.

The conflict in Cambodia was also caught up in another country’s war: Vietnam. Vietnam at this time was fighting against the French for independence. The French were defeated in 1954, and Vietnam found itself divided in two: communist North Vietnam and pro-Western South Vietnam. Civil war immediately broke out between the two factions. The Viet Congo, a Vietnamese communist guerilla group with support from North Vietnam and China, fought the South Vietnamese army.[1] In 1964, the US entered the Vietnam War and, after several years of fighting, the US finally withdrew. The war was inconclusive, had cost over three million American and Vietnamese lives, and left the region devastated.[2]

Under Prince Sihanouk, Cambodia had maintained neutrality during the Vietnam War by giving support to both sides. The Viet Cong were allowed to use Cambodian ports to ship in supplies while the US was allowed to bomb Viet Cong hideouts in Cambodia- secretly and illegitimately. US troops were allowed to move freely into Cambodia to continue their struggle with the Viet Cong. For the next four years, American B-52 bombers led attacks to destroy suspected North Vietnamese supply lines. In this effort, as many as 750, 000 Cambodians were killed.[3] In 1975, North Vietnamese forces seized South Vietnam’s capital, Saigon, and by the Khmer Rouge and its leader Pol Pot defeated Cambodian Lieutenant-General Lon Nol. Approximately 156, 000 Cambodians died in the civil war, half of them civilians.[4]

RISE OF THE KHMER ROUGE

The Khmer Rouge was a brutal, murderous revolutionary group intent on revolutionizing Cambodian society. On April 17, 1975, the Khmer Rouge army marched into Phnom Penh, the modern capitol. Khmer Rouge soldiers, young peasants from the provinces, mostly uneducated teenage boys who had never been in a city before, swept through town. They set to their job right away, evacuating Phnom Penh and forcing all of its residents to leave behind all their belongings and march towards the countryside. “Hospital patients still in their white gowns stumbled along carrying their IV bottles. Screaming children ran in desperate search for their parents.”[5]

Although the Khmer Rouge movement was small at first, new people were constantly being recruited. Many Cambodians had become disenchanted with western democracy due to the huge loss of Cambodian lives that resulted from the US strategy to involve Cambodia in the Vietnam War. The heavy U.S. bombardment, and Lon Nol’s collaboration with the US, drove new recruits to Pol Pot’s Khmer Rouge guerilla movement. Pol Pot’s communism brought with it images of new hope and national tranquility for Cambodia. By 1975, Pol Pot’s force had grown to over 700, 000 men. Within days of the Khmer Rouge takeover of Phnom Phen, Pol began implementing his extremist policies of collectivization. The government confiscated and took control of all property including schools, hospitals, various other societal institutions, and communal labor.

Pol Pot was educated in France and he was an ardent admirer of “Mao” (Chinese) communism as well as Stalinism. Pol Pot envisioned the creation of a “new” Cambodia based on the Maoist-Communist model and wanted to restore the country to an agrarian society based on Maoist ideals.[6] The aim of the Khmer Rouge was to deconstruct Cambodia back to a primitive “Year Zero, ” wherein all citizens would participate in rural work projects, and any Western innovations would be removed. “It was an attempt of the Khmer Rouge to nationalize and centralize the peasant farming society of Cambodia virtually overnight, in accordance with the Chinese Communist agricultural model.”[7]

In order to achieve the “ideal” communist model, the Khmer Rouge believed that all Cambodians must be made to labor for a federation of collective farms; anyone in opposition to this system must be eliminated. Under threat of death, Cambodians nationwide were forced from their hometowns and villages. The ill, disabled, old, and young who were incapable of making the journey to the collectivized farms and labor camps were killed on the spot. People who refused to leave were killed, along with any who appeared to be in opposition to the new regime. Residents of entire cities were forcibly evacuated to the countryside. All political and civil rights of the citizen were abolished. Children and parents were separated and sent to different labor camps.[8]