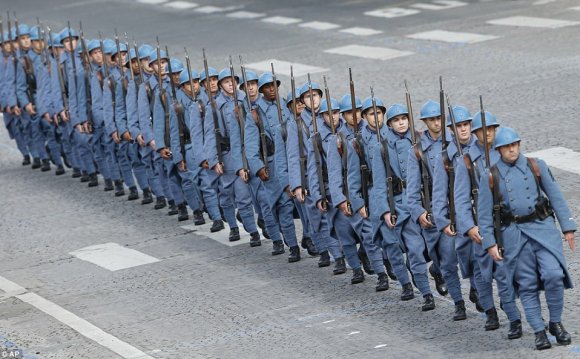 Introduction to the First World War

World War 1 is a military conflict that began on 28 July 1914 and lasted until 11 November 1918. Also called the Great War, it was mostly centered in Europe on the Franco-German borders.

More than 9 million of the combatants were killed, due to the stubbornness of the leading officers and politicians; the new generation of weapons for example gas; and other technological advances such as the tank and for the first time aircraft.

The First World War or The Great War was spread across several frontiers and this a chronological time line of events in France.

Figures and numbers and statistics

The figures below concern only the population of France and not their allies. These figures alone are outstanding and will give you an indication of the dimension of damage, pain and sorrow generated by a strange war. Very few countries in the world did not suffer.

More than 8, 000, 000 non professional soldiers where mobilized forduring the war.

Of France's total population 1 out of 20 were killed.

52% of the total of men mobilized were killed or wounded.

In 1914, more than 65, 000 mobilized horses were shared between the five French armies.

28 June : Archduke Franz Ferdinand, the heir to the throne of Austria-Hungary and his wife Sophie are murdered by Gavrilo Princip. The assassination lead to an escalation of violence in Bosnia and Herzegovina. The 28th of June 1914 is considered the beginning of World War I.

31 July : The French socialist leader, Jean Jaurès who was for peace is murdered.

2 August : General Mobilization Order in France. Germany sends an ultimatum to Belgium in order to use their territory for the invasion of France. Belgium refuses.

4 August : Germany invades Belgium.
The Chancellor declares the treaty of Belgium neutrality is only "a scrap of paper".
United Kingdom enter the war against Germany.

19 August : In the region of Alsace, French Army tries to attack again Mulhouse.

21 August : France and United Kingdom are defeated at the Battle of Frontiers. The French Generals Dubail, Castelnau, Lanrezac and their armies retreat.
The same day, the 4th Army of General Langle de Cary is unable to resist against the Imperial German Army, it's the Battle of the Ardennes
( During the WWII, another battle was fought in the same place ).
20, 000 French soldiers are killed, captured and wounded.

24 August : La Grande Retraite ( the Great Retreat ) is a slow retreat by the Allied to the Marne.

25 August : The British II Corps of Commander General Horace Smith-Dorrien to stand and fight. The next day, German forces nearly destroys the British positions who are saved by the French Cavalry.

4 September : The Germans capture the city of Reims.

3 October : The First Canadian Battalion is mobilized for France.

5 October : The first aerial fight at Reims. The French troops shoot down a German Aviatik with rifles.

14 December : The beginning of the first Battle of Champagne.

25 December : It is the Christmas Truce in several places of the Western Front.

4 February : The beginning of the Submarine wars.

Other events of February : Allied forces try to prevent the transfer German soldiers to the Russian front. Reims is bombarded the 20th. 60% of the city is destroyed.

5-12 April : Battles in Les Esparges. The most violent since the beginning of the War. The countryside around the village still show signs of the fight.

18 July : The first 6 days of leave (rest) for the French soldiers.

25 September : The British a nd French launch the second offensive in the Champagne, it fails leaving more than 130 thousand killed.

21 February : The Battle of Verdun begins.

27 April : A honorific title called Mort Pour La France ( Dead for France ) is created to remember the sacrifice of thousands of men.

June : German forces move forward in the Battle of Verdun.

1 July : The beginning of the battle of the Somme. British volunteers, Australian, Canadian, African troops and soldiers from New Zealand are fighting with France against the German Army.

24 October : In 4 hours, British and French troops get back all the territory conquered in 8 months by the Germans near Vaux ( Somme ).

12 December : After almost 11 months, the Battle of Verdun ended. 163, 000 French soldiers died and the German losses are approximately 143, 000. The number of wounded are twice the deaths from both sides.