World War One for Kids 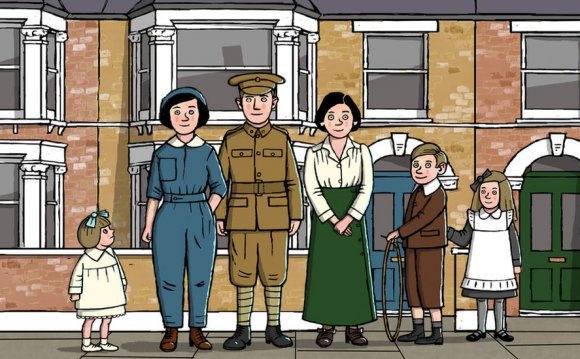 The figure of the child is one that challenges popular perceptions of the war. It is a figure that is complex and shifting in terms of the way it operates within discourses of empire, war and nationhood, yet it is a figure that is often unnoticed or dismissed as not participating or not able to understand the complexities of war. Yet archival material on propaganda directed at children, such as the Italian book for schoolboys, I ragazzi e la Guerra [Children and the War] (1917), along with children’s own writing about their experiences of war, such as the poem written by 11-year old Anny Politzer, ‘Der heimkehrende Krieger’ [‘The Returning Soldier’] (1914-18), suggests that some children occupied an engaged position in relation to the war.

The returning soldier - Poem by an 11 year old schoolgirl

Poem written by an 11-year-old school girl about a returning soldier walking through Vienna.

View images from this item (1)

Such material can help us to explore questions of how understandings of the figure of the child are tied up in the shifting positions of adulthood in war, as well as how representations of the child were complicit in restructuring attitudes towards war. The material held in these collections demonstrates that children did not keep diaries in the same way as adults, or that this material has not survived – where we can trace the impact of war on children, however, is primarily in schoolwork and in drawings.

In a collection of school essays, published in 1915, The World War and Personal Expressions by Children: 150 German School Essays, students discuss their experience of war through the events that they have experienced – for example, saying goodbye to their father, news of missing or killed family members, celebrations after a victory, or the constant sound of bombs. What is also clear from this is how deeply children are influenced by propaganda – for example, they anticipate a victory through the cultural and educational recollection of past German victories. Here, then, we have evidence of how children are both products of propaganda and also producers of the same. An Austrian essay, ‘How I made a nightly attack on London with my Zeppelin’, is a story written by a child imagining successfully attacking London . We can see that new technologies were often a source of excitement for children, so that which is figured in adult writing about the war as a source of terror or fear, is, in children’s writing, a source of interest and excitement.

Similarly, the boys of Princeton Street Elementary School in London wrote of their impressions of airship raids and these essays offer crucial insight into how the UK was not at all prepared for airship attacks.

These boys express both excitement and fear during the airship raids, and satisfied their curiosity by going out to inspect the damage once the raids were over. The war was also introduced into school lessons in ways that might not be immediately obvious. Arithmetic questions, such as those included in the German textbook Krigsrechenaufgaben [War Calculation Tasks]

(1916), were loosely based around the successes of the German army – so for example, calculations about the amount of wool needed to knit gift parcels for the troops or calculating the length of row of prisoners beside a railway line. Here the war is used not as a subject for teaching, but as a background example, indicating the pervasiveness of the war to everyday lives.

Children’s lives were often expected to continue as normal, and the French photograph ‘Mère et enfant munies d’un masque à gaz’ [‘Mother and child wearing gas masks’] shows a child helping her mother cook, but the insertion of the gas mask here is indicative of anxieties surrounding the development of long-range weapons and advances in chemical warfare. It indicates how the domestic space of the home was also a potential site of invasion, and the way in which the child was thus positioned as a combatant in the war. That these writings and images come from France, Italy, Austria, Germany and the UK indicate how the figure of the child is one that crosses borders and boundaries, both imaginary and physical, in wartime.

World War One: The Indian Army