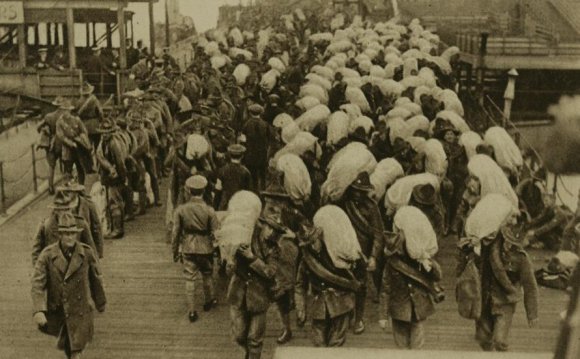 Consider this. While John Redmond and his Irish Parliamentary Party colleagues paraded the length of Ireland to recruit soldiers for an ‘Irish Brigade’ of the British Army in the belief that Home Rule had already been guaranteed, the Secret Elite, who controlled Asquith’s government and the upper echelons of the British Army [1] had determined that neither would happen.[2]

Their influence over senior appointments in the British Army was virtually absolute and inside that special coterie of military commanders, Anglo-Irishmen were dominant. Field Marshal Lord Frederick Roberts, whose father was a native of county Waterford, had nominally retired from office in 1905 but in reality his imposing influence over military appointments continued unabated. [3] He was also President of the National Service League which advocated four years of compulsory military training for every man aged between 18 and 30. [4]

Fellow members included his personal friend, Lord Alfred Milner with whom he frequently shared platforms. Sir Henry Wilson, Commandant of the Staff College at Camberley and Director of Military Operations from 1911 onwards was another very influential Irishman.[5] He was born in Longford and his family claimed to have come to Ireland with William of Orange.

Sir John French, Commander in Chief of the British Expeditionary Force was of Anglo-Irish descent and Kitchener himself, resplendent as Field Marshal and Secretary of State for War, was raised in Ballylongford in County Kerry. They wore their ‘Irishness’ as it suited their purpose, but every one considered the Irish National Volunteers with deep suspicion. Kitchener is said to have regarded them as ‘ rebels in sheep’s clothing’. [6] These senior commanders had colluded with Lord Milner, Sir Edward Carson and Andrew Bonar Law to protect the Ulster cause from 1912 -1914. [7] When it came to Ireland, they were not impartial guardians of the nation.

Desperate to impress the British Establishment that Ireland would play her part loyally in defence of Belgium, and concerned that she would be dishonoured if the Nationalists did not support the war against Germany, Redmond went to meet Kitchener at the War Office as early as 6 August, 1914. [8] His reception was cold and friendless. [9] No-one took up Redmond’s generous offer that his Volunteers should defend the island’s coasts and the first of many opportunities to treat Ireland with a new found confidence and respect was rejected. [10] Much more was to follow. The preferential treatment which the Ulstermen had always enjoyed from the British State continued to manifest itself, especially in the army.

Prime minister Asquith appeared to promise a new approach when he addressed a great rally at the Mansion House in Dublin on 25 September. His speech was recorded over two pages of The Times, and the impression he gave promised that there would soon be an Irish Division in the South to match the Ulster Division in the North. He declared: ‘We all want to see an Irish Brigade or better still an Irish Army Corps…Don’t be afraid that by joining the colours they will lose their identity and become absorbed in some invertebrate mass, or, what is perhaps equally repugnant, be artificially distributed into units which have no nation cohesion or character’. [11] Clearly he had not discussed this matter with Kitchener who was prejudiced against Home Rule and would not countenance a distinctive Irish division with its own badge and colours, based on the Irish Volunteers.

Indeed Irishmen enlisting in mainland Britain who wanted their identity to be acknowledged in some tangible way were snubbed in like vein. [12] Despite this, Irishmen flocked to the standard in places like Tyneside where four Irish ‘pals’ battalions were raised as part of the Northumberland Fusiliers. [13] An official request from Redmond that at least one of these battalions be trained in Ireland to encourage recruitment and pride, was summarily refused. [14] Kitchener believed, as did the Secret Elite cabal which had pushed for his appointment, [15] that if the Volunteers were trained, armed and kept together in coherent units, there would be civil war once the crusade against Germany was over, with no advantage to Ulster.

The Crew Does History: Germany in World War One