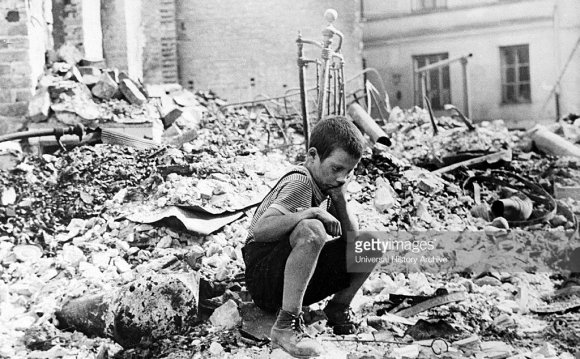 German troops shown marching through Warsaw after their invasion of Poland in September 1939. (National Archives and Records Administration)

Just over a week ago The Almanac featured The Nation’s response to the Hitler-Stalin Pact, in which the leaders of Nazi Germany and the Soviet Union agreed to divvy up Poland and, for a time, avoid direct confrontation in war. The almost-inevitable consequence of that agreement, the German invasion of Poland, came on this date in 1939. In his poem, “September 1, 1939, ” first published in The New Republic, W.H. Auden wrote about sitting in a dive bar in midtown Manhattan as the world hurtled toward war: “Defenceless under the night/ Our world in stupor lies.” In its issue of September 9, , which had long advocated a united democratic fight against fascism, responded to the beginning of war with an editorial titled “Munich Bears Fruit.”

August, 1938, ended in Munich. August, 1939, ended in war. But, in fact, the new world war was bred at Munich and in the series of surrenders to force and threats that preceded Munich. If August, 1938, had ended in a decision to defend Czechoslovakia as Poland is now being defended, it is possible that no armed conflict would have resulted. Munich persuaded Hitler of the indestructible temper of his nerves, the invincibility of his forces….

The issue is not a romantic one that can easily be dressed up in the camouflage of propaganda. It is simply this: Hitler’s struggle for power must be thwarted. The qualified blessings of old-fashioned imperialism must be preserved as a bulwark against the spread of fascist domination. And democracy—even that “pluto-democracy” derided by Hitler—must be defended against a despotism that would crush all attempts to make democracy real. Put in more concrete words, the governments of the Western nations must fight for their existence, and the peoples must fight to hold on to their hard-won political and economic liberties, to prevent the spread of an organized system of persecution.

To mark The Nation’s 150th anniversary, every morning this year The Almanac will highlight something that happened that day in history and how The Nation