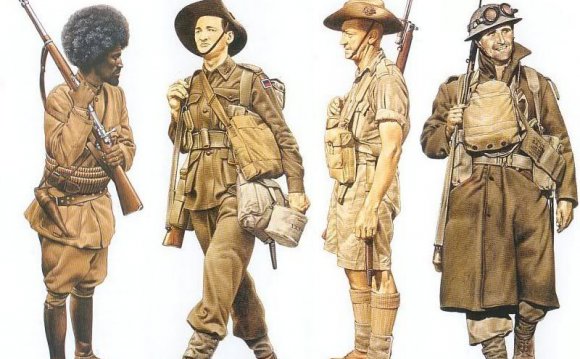 Resembling the Imperial German Army M1842/M1856 uniform, the dark blue single-breasted tunic had a low standing collar and no pockets. It was worn with matching straight trousers and a kepi (red for Imperial Guard) on which was worn a brass five point star. After the Franco-Prussian War the kepi was replaced with a flat topped peaked cap and the tunic collar became higher. Pockets were added to officers' tunics late in its issue.

Infantry uniforms had red facings on tunic collars, shoulder straps and trouser stripes. Line infantry had yellow bands and piping on their caps while the infantry of the Imperial Guard were distinguished by red. Trouser seams for both branches of the infantry had wide red stripes. Artillery had yellow facings on their dark blue uniforms. The branch colour for engineers was dark brown, green for medical and light blue for transport units. Finance, administration and other support services had white facings.

A dark blue shako (red for Imperial Guard units) with a short white plume was worn for full dress. The ordinary duty and active service headdress was however a form of peaked cap with a narrow crown, somewhat resembling the French kepi of the period.

A lightweight white cotton uniform was used for fatigue duties and tropical wear. In hot weather white trousers and cap covers were worn with the dark blue tunics. White canvas leggings were worn by non-mounted personnel with both white and blue uniforms until 1906.

Senior officers could wear a longer, double-breasted version of the tunic in full dress. Other features included elaborate Austrian knots (gold braiding on the cuffs according to rank), waist sashes, gold shoulder cords and plumes on the dress kepi. For ordinary duties and active service officers of all ranks wore dark blue dolmans braided in black. In 1904 this was replaced by a dark blue tunic of simpler pattern.

Cavalry regiments wore a short attila jacket with transverse hussar style braiding in yellow (red for the cavalry of the Imperial Guard). Breeches were red. The cavalry branch colour was green and in 1905 this colour appeared on both collars and breeches stripes. As with the other branches of the Imperial Guard, the cavalry were distinguished by red bands and piping on their service caps. Red trousers were also worn by army bands and by the Military Police (Kempeitai).

The dark blue uniform adopted under the 1886 Regulations was retained with only minor modifications until 1905. As such it was worn during the early months of the Russo-Japanese War. A khaki summer uniform had been introduced shortly before the outbreak of war and this became general issue for front line infantry during June–August 1904. Cavalry and artillery were subsequently issued with the new khaki uniform but some second line units continued to wear dark blue until the end of the War in September 1905. During the winter of 1904-05 the heavier blue uniforms were again worn but often under the loose fitting summer khaki drill for camouflage. The white canvas leggings continued to be worn without darkening, until after the war.

Following the Russo-Japanese War the Japanese Army adopted khaki for all occasions - the first major army to discard colourful parade dress. Only the cavalry squadrons of the Imperial Guard and officers of all branches were authorized to retain their coloured uniforms for certain ceremonial and social occasions, until 1939.

IJA General Kuroki and his Chief of Staff wearing the 1904 uniform during the Battle of Liaoyang.
Source: en.wikipedia.org