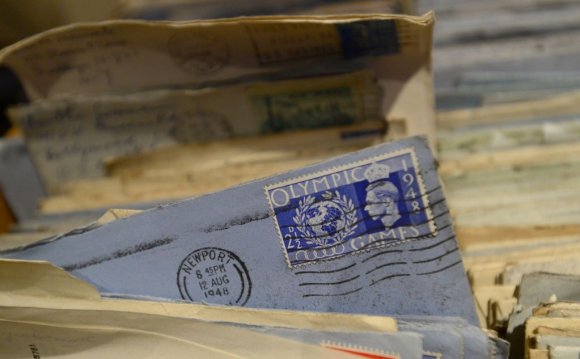 The four pages, unearthed 70 years after their origin, are stark in simplicity and detail: One young man, one typewriter, together aboard the U.S.S. Doyen.

“Hello everyone!” reads a handwritten greeting on the top of page one, followed by a single-spaced report complete with wisecracks and World War II talk direct from young Sal Murino to his family.

The long, yellowing letter from the U.S. Navy man offers a first-person recitation of the fighting from Dec. 1944-March 1945 as the devastating war finally neared its finish.

“We stayed at Iwo Jima for about 15 days, ” wrote Murino, a round-faced young man in his 20s, whose sometimes fractured syntax still paints a vivid picture of the carnage in the Pacific Theater.

“To hear one combat fatigue(d) Marine put it who was smoking an endless chain of cigarettes — said, ‘Those bastards had us surrounded and throwing everything at us.’ Incidentally, this Marine wanted to go back and fight as he did not want to leave his buddies.”

The letters were in the custody of Murino’s niece, Marie, who across the decades tended carefully to the pages that preserved an unseen slice of history.

Sal Murino typed the letters to his family back in Brooklyn while he was overseas.

The four typewritten pages from young Sal Murino to his family provide an in-depth look at what it was like fighting from Dec. 1944-March 1945 as World War II was finally nearing its finish.

Marie's husband Jim, a regular reader of the Daily News, convinced her to share the letter seven decades after it reached her Brooklyn mailbox.

The missive was mailed to the entire Italiano family, living on DeGraw St. in South Brooklyn. Marie’s mother had three sisters and four brothers — Sal, Johnny and Tony were all fighting overseas.

“Iwo Jima ... The Marines had a helluva time, ” Sal wrote in one passage. “Jap resistance was very strong. This island was well fortified. Our planes were zooming over them dropping their eggs and meanwhile from the sea our ships were shelling these same caves.”

Yet progress against the tenacious Japanese fighters was slow despite the firepower — and came at a price.