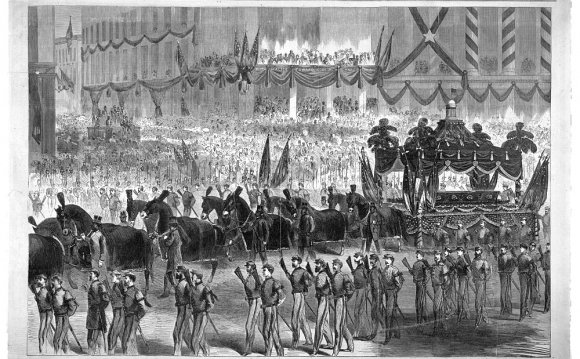 The Petersen House (House Where Lincoln Died) at 516 10th street was the home of William and Anna Petersen. On the night of April 14, 1865 the mortally wounded president was carried to a back bedroom in this house. The Petersen family aided as they could, although on this night their home was no longer their own. Over 90 people would come and go through the house to pay their last respects to the dying president. Soldiers stood guard at the front door and were posted on the roof to keep the growing crowds at bay. While doctors cared for the president the Petersen family and some of the boarders spent the night in the basement. At 7:22 am, April 15, 1865, Abraham Lincoln died in the back bedroom of this humble house.

Touring the Petersen House: The three rooms in the house today are furnished in 1865 period pieces, none of the furniture is original to the house. Visitors use the same ticket that they used to tour Ford's Theatre. The House is open 9:30 am to 5:30 pm daily. Visitors will now enter The Center for Education and Leadership from the back porch.

Housed in a building directly across the street from Ford's Theatre and acquired by the Ford's Theatre Society in 2007, the Center features two floors of permanent exhibits addressing the immediate aftermath of Lincoln's death and the evolution of Lincoln's legacy; a Leadership Gallery floor to be used for rotating exhibits, lecture and reception space; and two floors of education studios to house pre- and post-visit workshops, after-school programs and teacher professional development.

The Death of Abraham Lincoln (in photos)