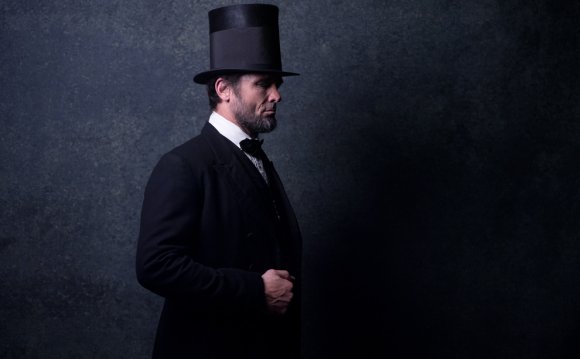 CAMDEN, N.J. - In the century and a half since it happened, populist history has largely boiled down the assassination of Abraham Lincoln to the story of a single perpetrator: John Wilkes Booth.

But in his appearance at the Camden County Historical Society, Lincoln scholar Hugh Boyle made clear that the real story is a sprawling epic.

It involves a gang of Confederate operatives and sympathizers that first plotted to kidnap the President and, when that failed, decided to murder not only him, but the Vice President and Secretary of State as well. Their goal was to decapitate and destabilize the federal government in hopes of forcing a settlement to the war that would avoid the South's total defeat. In the end, they managed to kill Lincoln and seriously injure Secretary of State William Seward.

Four executed
The gang leader - 27-year-old John Wilkes Booth - was tracked down and shot to death by Union soldiers in Virginia. Eight others were convicted of being conspirators with Booth. Four were sentenced to death and hung, including the first woman ever executed by the U.S. government. The other four were sent to a remote prison island off the coast of Florida.

"For instance, author Vincent Bugliosi recently put out a book that documents the Kennedy assassination and it runs to more than 1, 500 pages. But if you tried to put together a similar book on the Lincoln assassination, it would be twice that size. That's how many people were involved in the investigation."

1865, the last year of the Civil War, was a time of extreme desperation for the slave-state Confederacy and its supporters. Vast stretches of the South's plantations, ports, railroads, and industrial facilities lay in total ruin. The probability of total defeat was now obvious.

'A time of terrorism'
"It was also a time of terrorism that we've largely forgotten, " said Boyle. "We saw the beginnings of chemical and biological warfare in this period. For instance, Dr. Luke Blackburn of Kentucky collected large quantities of clothes and blankets from a Yellow Fever outbreak and shipped them to Washington in hopes of triggering an epidemic there.

Other people were trying to poison the water supplies of northern cities. Still others were setting fire to hotels in New York. It was a time of massive upheaval, great danger and high emotion for the South, so the idea that someone might be thinking about attacking the President or other high government officials was not a crazy one in the atmosphere of the times."

The frustrations and angst of the Southern cause came to a boil in April of 1865. Its capital, Richmond, Va. - now a burned out hulk of a city - was captured and occupied by Ulysses S. Grant's forces on April 3. The first Union Army units that marched into the city were U.S. Colored Troops.

Six days later, Robert E. Lee's Army of Northern Virginia surrendered and was disarmed at Appomattox. Three days after that - April 11 - President Lincoln, standing in a second-story window of the White House, spoke to a huge crowd in a city gone wild in celebration of the Appomattox surrender.

Lincoln's last speech
But among those listening in that crowd were John Wilkes Booth and 21-year-old Lewis Thornton Powell.

Booth was one of the country's most famous actors and an ardent supporter of the Confederacy. His young companion, Powell, was a Confederate army veteran and a second cousin of Confederate general John B. Gordon, head of Georgia's Ku Klux Klan.

Powell, who enlisted at age 17, fought at Antietam, Chancellorsville, Murfreesboro and Gettysburg, where he was wounded and taken prisoner of war. He escaped his captors and, using the alias Lewis Payne, joined a Confederate guerilla-warfare unit conducting raids behind Union lines.

Under circumstances that have never been fully documented, Powell/Payne suddenly left that unit to work with John Wilkes Booth in a plan to kidnap Abraham Lincoln. It was strongly believed - but never conclusively proven by Union military investigators - that a Canadian-based arm of the Confederate Secret Service was behind that kidnap plot.

Lincoln kidnap plot
"The plan, " said Boyle, "was to kidnap Lincoln, take him to Richmond and use him as a bargaining chip to win the release of all the Confederate prisoners being held in Union prison camps."

In March of 1865, Booth, Powell and a number of other conspirators prepared to seize Lincoln as he traveled to attend a play at a hospital near the Washington cottage that served as his Presidential summer home. The gang took up position on the road to the hospital but their venture failed when Lincoln changed plans and attended another capital function instead.

A month later, as he and Powell stood in front of the White House on April 11, Booth decided to escalate the plot from kidnapping to murder.

"Booth was enraged as he listened to Lincoln talk about how Black men should have the right to vote in that speech, " said Boyle. "We believe that Booth made up his mind about the assassination on that day. We know he turned to Powell and said, 'That's the last speech Lincoln will ever give.'"

The war wasn't over
"Its important to understand that neither the fall of Richmond nor the surrender of Lee at Appomattox ended the war, " said Boyle. "A lot of people today aren't clear on this and it's an important fact because it played a big role in the ultimate fate of the conspirators. Confederate general Joe Johnston was still fighting Sherman down in the Carolinas. The war wasn't over."

At the time he began planning the earlier failed kidnap attempt, John Wilkes Booth recruited a number of people to help. Powell, the battle-hardened Confederate veteran, was crucial to the plan because of his strength and size.

"Booth knew he needed a big, strong guy, about six-foot-five or so, " said Boyle. "Why? Well, if you're going to kidnap a President who was six-foot-four, you better have a guy his size.

Powell was enormously strong and he also developed the strangest and most dedicated allegiance to Booth of all the conspiracy group members."

"Before he went into Ford's theatre, " said Boyle, "Booth stopped in a saloon along the side of the theater. As he was having a drink, someone in there recognized him and said, 'You're not

the actor your father was, ' Booth's answer was 'When I leave the stage, I'll be the most famous man in America.'" A short time later, sneaking into the President's theater box, he shot Lincoln in the head at point-blank range.

The Many Attempts to Kill President Abraham Lincoln