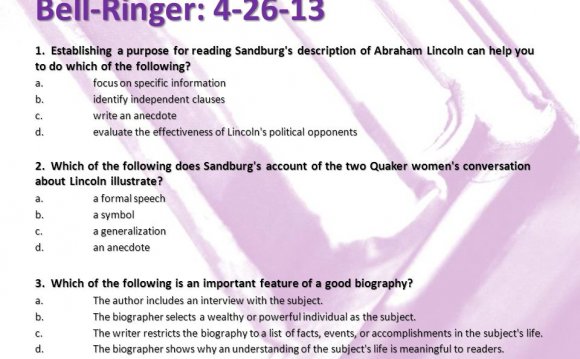 NAME: Abraham Lincoln. He was named after his paternal grandfather.

PHYSICAL DESCRIPTION: Lincoln, the tallest president, stood 6 feet 4 inches tall, weighed about 180 pounds, and had long, gangling limbs and a rather sunken chest. His course black hair was gray at the temples while he was president. His eyes were gray, the left one being slightly higher than the right. He began wearing reading glasses at age 48. He had a wart on his right cheek above the corner of his mouth. He also had a white scar on his thumb from an accident with an ax and a scar over his right eye from a fight with a gang of thieves. Long hours swinging an ax had given him muscular arms and shoulders. By conventional standards, Lincoln was homely; to some, downright ugly. “His cheekbones were high, sharp and prominent, ” wrote his law partner William Herndon, “his eyebrows cropped out like a huge rock on the brow of a hill; his long sallow face was wrinkled.” But to his private secretary John G. Nicolay, Lincoln’s features were too complex to be recorded accurately by photographers, painters, or sculptors. “Graphic art, ” he commented, “was powerless before a face that moved through a thousand delicate gradations of line and contour, light and shade, sparkle of the eye and curve of the lip, in the long gamut of expression from grave to gay, and back again from the rollicking jollity of laughter to that far-away look.” For his part, Lincoln was comfortable with his homely appearance and readily poked fun at himself. His careless dress habits further detracted from his appearance.

During his term as president, Lincoln complained of frequent fatigue, severe headaches, and cold hands and feet. This and other evidence gathered over the course of 20 years of research into Lincoln’s medical history has led Dr. Harold Schwartz of the University of Southern California School of Medicine to conclude that at the time of his assassination Lincoln was dying of heart disease. Writing in the Western Journal of Medicine in 1978, Dr. Schwarz asserted that Lincoln suffered from Marfan’s syndrome, a hereditary disease that affects bone growth and heart function. Dr. Schwartz noted that Lincoln had disproportionately long arms and legs, unusually long middle fingers, and a sunken chest - all typical of Marfan sufferers. Moreover, Dr. Schwartz observed, Lincoln once commented that his left foot vibrated involuntarily hen he sat with his left leg crossed over his right. This, said Dr. Schwartz, undoubtedly was caused by aortic regurgitation, a Marfan-related disorder in which the valves of the great artery leading from the heart do not close properly, causing blood to flow in spurts with enough force to wiggle a dangling foot. Lincoln also struggled with chronic constipation throughout much of his life.

PERSONALITY: By all accounts, Lincoln was disarmingly unpretentious, a plain-spoken man genuinely interested in people and their problems. A good listener, he typically sat in silence rubbing his chin while a visitor explained his point of view. He was at his best in relaxed conversation with small groups. His ready wit, down-home logic, and seemingly endless store of anecdotes delighted those present. “His custom of interspersing conversation with incidents, anecdotes, and witticisms, ” commenting one observer, “are well calculated to impress his hearers with the kindheartedness of the man. And they are so adroitly and delicately mingled in the thread of his discourse that one hardly notices the digression.” For all his good humor, however, Lincoln had a dark side; he wrestled with severe bouts of mental depression. Long time friend Joshua Speed recalled that when he first met Lincoln, then a young lawyer, “I look up at him, and I thought then, as I think now, that I never saw so gloomy and melancholy a face in my life.” Lincoln himself once complained, “If what I feel ere equally distributed to the whole human family, there would not be one cheerful face on the earth. Whether I should eve be better, I cannot tell; I awfully forebode I shall not. To remain as I am is impossible; I must die or be better, it appears to me.” Lincoln spoke in a high pitched voice with a marked frontier accent, pronouncing such words as get, there, and chair as git, thar, and cheer and saying haint for haven’t.

Abraham Lincoln, the Election of 1860, and Secession

Parts of Speech and Abraham Lincoln