Flags from the American Revolution 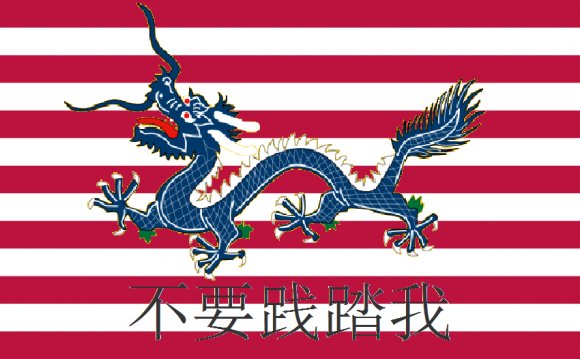 Still another was a white flag with a green pine tree and the inscription, "An Appeal to Heaven." This particular flag became familiar on the seas as the ensign of the cruisers commissioned by General Washington, and was noted by many English newspapers of the time. [Available from FlagLine.com.]

Flags with a rattlesnake theme also gained increasing prestige with colonists. The slogan "Don't Tread on Me" almost invariably appeared on rattlesnake flags. A flag of this type was the standard of the South Carolina Navy. Another, the Gadsden flag, consisted of a yellow field with a rattlesnake in a spiral coil, poised to strike, in the center. Below the snake was the motto, "Don't Tread on Me." [Available from FlagLine.com.]

Similar was the Culpepper flag, banner of the Minutemen of Culpepper (now spelled Culpeper) County, Virginia. It consisted of a white field with a rattlesnake in a spiral coil in the center. Above the rattlesnake was the legend "The Culpepper Minute Men" and below, the motto, "Liberty or Death" as well as "Don't Tread on Me." [Available from FlagLine.com.]

In December of 1775, an anonymous Philadelphia correspondent wrote to Bradford's Pennsylvania journal concerning the symbolic use of the snake. He began the letter by saying:

I recollected that her eye excelled in brightness that of any other animal, and that she has no eye-lids. She may, therefore, be esteemed an emblem of vigilance. She never begins an attack, nor, when once engaged, ever surrenders. She is, therefore, an emblem of magnanimity and true courage.

It was probably the deadly bite of the rattler, however, which was foremost in the minds of its designers, and the threatening slogan "Don't Tread on Me" added further significance to the design.

The Moultrie flag was the first distinctive American flag displayed in the South. It flew over the ramparts of the fort on Sullivan's Island, which lies in the channel leading to Charleston, South Carolina, when the British fleet attacked on June 28, 1776. The British ships bombarded the fort for 10 hours. But the garrison, consisting of some 375 regulars - and a few militia, under the command of Col. William Moultrie, put up such a gallant defense that the British were forced to withdraw under cover of darkness. This victory saved the southern Colonies from invasion for another two years.

The flag was blue, as were the uniforms of the men of the garrison, and it bore a white crescent in the upper corner next to the staff, like the silver crescents the men wore on their caps, inscribed with the words "Liberty or Death." [Available from FlagLine.com.]

The Maritime Colony of Rhode Island had its own flag, which was carried at Brandywine, Trenton, and Yorktown. It bore an anchor, 13 stars, and the word "Hope." Its white stars in a blue field are believed by many to have influenced the design of our national flag. [Available from FlagLine.com.]

The Army preferred its regimental flags on the battlefield instead of the Stars and Stripes. A popular form of the U.S. flag that was used in battle had the obverse (front) of the Great Seal in the canton.