French General in the American Revolution 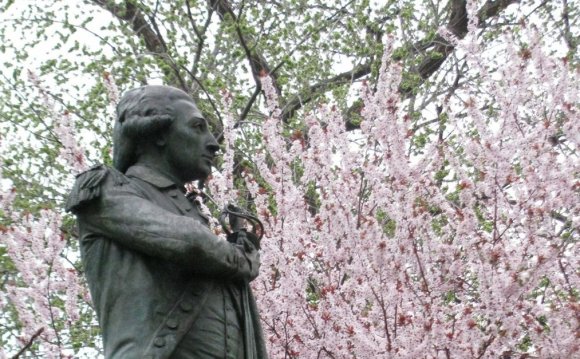 and the Winning of American Independence

The ink was barely dry on the Treaty of Paris in 1763 before the French foreign ministry began planning and preparing for the “next” war with Great Britain. As a nation France was determined to avenge its humiliating defeat during the Seven Years War, which had forced it to give up Canada and had upset the balance of power in Europe. As early as 1767 France began following the growing conflict between Great Britain and its North American colonies with great interest, even sending agents to America to discover how serious the colonists were in their resistance to British attempts to tax them without their consent.

In 1774 supporters of the Patriot cause approached French officials asking for assistance, but the French Foreign Minister, the Comte de Vergennes, decided it was too soon to get involved. He feared that the crisis might be resolved or that open intervention would lead to a war that France was not yet ready for, and instead he adopted a policy of “watchful waiting.” In 1775, however, he did send a secret agent to Philadelphia to meet with the Continental Congress. There were two necessary conditions for France to openly help the American rebels: first they had to declare their independence, and second they had to show that they were capable of defending themselves against the British army. Until these conditions were met, Vergennes decided to officially remain neutral, but early in 1776 he began secretly sending military supplies and financial aid to the Americans.

By the fall of 1776 a fictitious trading firm had already procured and shipped to the rebels nearly 300, 000 pounds of gunpowder, 30, 000 muskets, 3, 000 tents, more than 200 pieces of artillery, and clothing for 30, 000 soldiers. In December 1776 three American agents in Paris, led by Benjamin Franklin, proposed a formal alliance between the United States and France. The French were still hesitant about openly entering the conflict, partly because preparations for war, especially efforts to strengthen the French fleet, were not yet complete.

A number of idealistic French aristocrats, such as the Marquis de Lafayette, were far too impatient to wait for their country to enter the war. In 1777 Lafayette and many others from France came to America to volunteer as soldiers in George Washington’s Continental Army. By the end of the year, news reached Paris of the stunning American victory in October at Saratoga, New York, over British General Burgoyne. With both of his conditions now met, Vergennes began negotiating a treaty of alliance with the American commissioners. On February 6, 1778, France and the United States signed a “Treaty of Alliance” as well as another treaty of “Amity and Commerce.” The French declaration of war against Great Britain changed everything. The British were now involved in a worldwide war, not just an attempt to put down a rebellion. The King’s ministers now had to adopt a more defensive military strategy, and they were also forced to spread their military resources and navy over a much wider theater of operations.

The grand strategy envisioned by the Continental Congress and its generals was to use French armed forces, especially the French navy, to neutralize the existing British superiority on land and at sea and thereby decisively defeat King George’s forces in America. The first direct French military support to reach America, in July 1778, was an expeditionary force of 4, 000 soldiers and 16 ships under the command of the Comte d’Estaing. The first attempt to mount a joint American-French military operation, however, ended in failure. The French ships were not able to join in an attack on British-occupied New York City because they could not get across a sandbar that blocked the entrance into the harbor. The next plan called for an assault on British troops at Newport, Rhode Island, with the French providing naval support to an American land force. Unfortunately a combination of poor communication and a lack of coordination once again led to failure. The Americans blamed the French for the botched attack, and when d’Estaing and his fleet returned to Boston for repairs, anti-French feeling was so great that a French officer was killed during a riot. These failures were due in part to cultural differences between the new allies. D’Estaing and his aristocratic officers were scornful of the citizen soldiers they encountered in America and treated them as inferiors.

The British were now shifting the main theater of their operations to the southern states, and by December 1778 they had captured Savannah, Georgia. In September 1779 Admiral d’Estaing returned to North America from the West Indies and made a second attempt at a joint military operation with the Americans, this time to retake Savannah from the British. Once again the campaign was unsuccessful. The allied army assaulted the strong British fortifications but was repulsed with heavy casualties. The Americans wanted to continue the siege, but d’Estaing refused as he was under orders to return to France. As a result of these failures many Americans had become disillusioned about the French alliance, and some even began to suspect French intentions. Growing ill will toward the French was only counterbalanced by the money and supplies that continued to arrive from France.

The year 1780 was perhaps the lowest point in the American struggle to win independence. The British were securely dug in at New York, had taken Charleston, South Carolina, in May after a brief siege, and were on the verge of overrunning the Carolinas. The only encouraging development was the arrival of another French expeditionary force under the command of the Comte de Rochambeau in July. For many months, however, Rochambeau’s small fleet and 5, 500 well-equipped soldiers were isolated in Rhode Island, blockaded by the British navy. Unlike Admiral d’Estaing, General Rochambeau took great pains to cultivate good relations with his American allies and treated George Washington as his equal. After conferring with General Washington in the spring of 1781, Rochambeau and his four regiments marched overland to join up with the Continental Army near White Plains, New York. His small fleet, which had on board state-of-the-art siege artillery, remained in Rhode Island.

Washington’s initial plan was to use the combined American and French forces to force the British out of New York City and its environs. The situation changed dramatically however, on August 14, 1781, when Rochambeau learned that Admiral de Grasse and a large French fleet, as well as some additional French infantry, would soon arrive in the vicinity of the Chesapeake Bay. De Grasse was prepared to support a military campaign in the area but was not willing to go as far north as New York, and he warned that he had to return to the West Indies by mid-October. This news was to set the stage for the final and decisive military campaign of the American Revolution.

God and Grain: The French Revolution, Part I

Britain and the American Revolution in the 1700 s