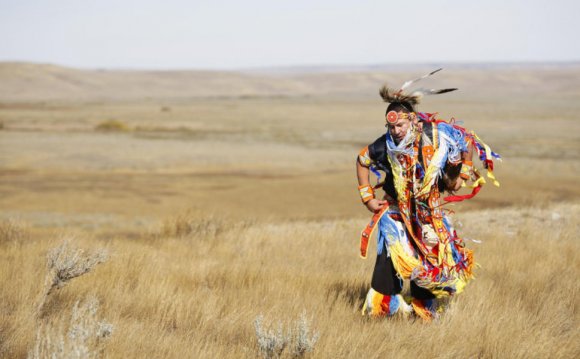 Before the arrival of the colonists, the Native Americans had already secured a foot-hold over the vast expanses of America. Initially the Native Americans were treated with an almost cursory respect as the new settlers and pilgrims were afraid, apprehensive, yet friendly and hopeful. The newcomers befriended many and made what they thought were close ties with their new brethren. But, unfortunately, it was not to last and disease coupled with the settlers ravenous desire to claim land as their own, destroyed everything the native peoples held dear. However, most of these mistakes have since been admitted, and reparation has been made. Fortunately history has not forgotten the many important faces and contributions of the original Americans. In honor of the United States’ Thanksgiving, here are 15 such heroes.

Perhaps one of the most capable warriors from the Oglala Lakota (Sioux) tribesmen ever faced by the US military, Makhpiya Luta, his Sioux name, led his people in what is known as Red Cloud’s War. This battle was for the rights to the area known as Powder River Country in Northern Wyoming and Southern Montana. Eventually he led his people during their time on reservation.

Though actually pronounced K-you Ch-Ish, this Apache leader is second only to Geronimo when it comes to that tribe’s historical significance. Often described as having the classical Indian frame; muscular, large for the time, and known to wear his long, black hair in a traditional pony tail, Cochise aided in the uprising to resist intrusions by Mexicans and American in the 19th century.

Born Elizabeth Marie Tall Chief to an Osage Nation father, she became an eventually well-know ballerina. In 1947 Maria began dancing with the New York City Ballet until her retirement in 1965. Soon after she founded the Chicago City Ballet and remained it’s artistic director for many years. Since 1997 she has been an adviser in the Chicago dance schools and continues to astound future dancers with her always-ahead-of-her-skill abilities and will be featured in a PBS special from 2007-2010.

Assisting the Pilgrims during their first, harsh winter, the Patuxet, Tasquantum (Squanto) befriended the group in order to see them safely through to spring. In 1608, alas, Squanto and several others were kidnapped by Georgie Weymouth and taken aboard ship to England. Though eventually earning a living and learning the English language, Squanto made his return home in 1613 aboard John Smith’s ship only to find his tribe completely wiped out by the plague.

With a name in his tribe, Lakota: Thasuka Witko, that literally means “His-Horse-is-Crazy”, this Native American was actually born with the name: Cha-O-Ha meaning in Lakotan, “In the Wilderness”, and he was often called Curly due to his hair. In the Great Sioux War of 1876, Crazy Horse led a combined group of nearly 1, 500 Lakota and Cheyenne in a surprise attack against General George Crook’s force of 1, 000 English men and 300 Crow and Shoshone warriors. The battle, though not substantial in terms of lives lost, nearly prevented Crook from joining up with General Custer, ensuring Custer’s subsequent defeat at the Battle of Little Bighorn. Crazy Horse went on to oppose the US Government in their various decisions on how to handle Indian affairs.

Sacajawea is most well know for accompanying Meriwether Lewis and William Clark during their Corps of Discovery of the Western United States in 1806. She was born in a Shoshone tribe as Agaidika, or “Salmon Eater” in 1788. In February of 1805, just after meeting Lewis and Clark, Lewis assisted in the birth of her son, Jean Baptiste Charbonneau. Her face now appears in the dollar coin.

Born William Peen Adair Rogers, a Cherokee-Cowboy, “Will” became best known as an actor, a Vaudvillian, a philanthropist, a social commentator, a comedian, and a presidential candidate. Known as Okalahoma’s favorite son, Rogers was born to a well respected Native American Territory family and learned to ride horses and use a lasso/lariat so well that he was listed in the Guiness Book of World Records for throwing three ropes at once—one around the neck of a horse, another around the rider, and a third around all four legs of the horse. He ultimately traveled around the world several times, made 71 films (50 silent and 21 “talkies”), wrote more than 4, 000 nationally-syndicated newspaper columns, and became a world-famous figure. He died in a plane crash in 1935.

Known in his Ottawa tongue as Obwandiyag, Chief Pontiac is most well known for his defense of the Great Lakes Region of the US from the British Troop invasion and occupation. In 1763, Pontiac and 300 of his followers attempted to take Fort Detroit by surprise. Eventually the revolt rose to 900 plus Natives and they eventually took the Fort at The Battle of Bloody Run. Though historically a prominent figure, many are still unsure as to his real importance and to whether or not he was a mere follower rather than a leader. Increasingly ostracized, in 1769 he was assassinated by a Peoria Indian in Illinois.

Origins Of The Native American Flute