France in the American Revolutionary War 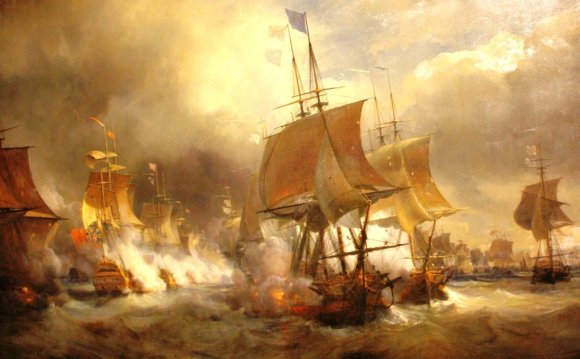 During the American Revolution, the American colonies faced the significant challenge of conducting international diplomacy and seeking the international support it needed to fight against the British. The single most important diplomatic success of the colonists during the War for Independence was the critical link they forged with France. Representatives of the French and American governments signed the Treaty of Alliance and the Treaty of Amity and Commerce on February 6, 1778.

American colonists hoped for possible French aid in their struggle against British forces. The Continental Congress established the Secret Committee of Correspondence to publicize the American cause in Europe. Committee member Benjamin Franklin wrote to contacts in France with encouraging accounts of colonial resistance. The French had suffered a defeat by the British during the Seven Years’ War and had lost North American territory under the 1763 Treaty of Paris. As the French and the British continued to vie for power in the 1770s, French officials saw an opportunity in the rebellion of Britain’s North American colonies to take advantage of British troubles. Through secret agents, the French Government began to provide clandestine assistance to the United States, much of which they channeled through American trader Silas Deane.

As the members of the Continental Congress considered declaring independence, they also discussed the possibility and necessity of foreign alliances, and assigned a committee to draft a Model Treaty to serve as guide for this work. After Congress formally declared independence from Great Britain in 1776, it dispatched a group of several commissioners led by Benjamin Franklin to negotiate an alliance with France. When news of the Declaration of Independence and the subsequent British evacuation of Boston reached France, French Foreign Minister Comte de Vergennes decided in favor of an alliance. However, once news of General George Washington’s defeats in New York reached Europe in August of 1776, Vergennes wavered, questioning the wisdom of committing to a full alliance.

Benjamin Franklin’s popularity in France bolstered French support for the American cause. The French public viewed Franklin as a representative of republican simplicity and honesty, an image Franklin cultivated. A rage for all things Franklin and American swept France, assisting American diplomats and Vergennes in pushing for an alliance. In the meantime, Vergennes agreed to provide the United States with a secret loan.

Road to the American Revolution: Causes-French and Indian War

What caused the American Revolutionary War?