What Happened in the American Revolutionary War? 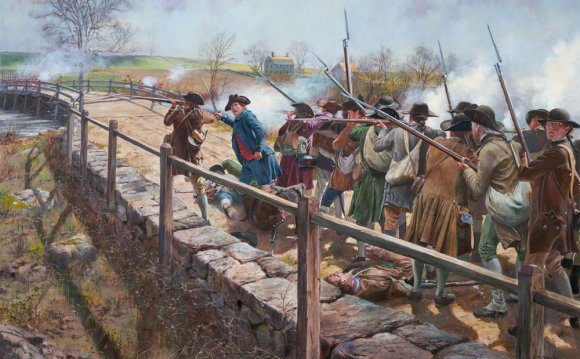 The war was truly over. It had lasted well over eight years, 104 blood-drenched months to be exact. As is often the habit of wars, it had gone on far longer than its architects of either side had foreseen in 1775. More than 100, 000 American men had borne arms in the Continental army. Countless thousands more had seen active service in militia units, some for only a few days, some for a few weeks, some repeatedly, if their outﬁt was called to duty time and again.

The war exacted a ghastly toll. The estimate accepted by most scholars is that 25, 000 American soldiers perished, although nearly all historians regard that ﬁgure as too low. Not only were the casualty ﬁgures reported by American leaders, like those set forth by British generals, almost always inaccurately low, but one is left to guess the fate of the 9, 871 men—once again, likely a ﬁgure that is wanting—who were listed as wounded or missing in action. No one can know with precision the number of militiamen who were lost in the war, as record keeping in militia units was neither as good as that in the Continental army nor as likely to survive. While something of a handle may be had on the number of soldiers that died in battle, or of camp disease, or while in captivity, the totals for those who died from other causes can only be a matter of conjecture. In all wars, things happen. In this war, men were struck by lightning or hit by falling trees in storms. Men were crushed beneath heavy wagons and ﬁeld pieces that overturned. Men accidentally shot themselves and their comrades. Men were killed in falls from horses and drowned while crossing rivers. Sailors fell from the rigging and slipped overboard. As in every war, some soldiers and sailors committed suicide. If it is assumed that 30, 000 Americans died while bearing arms—and that is a very conservative estimate—then about one man in sixteen of military age died during the Revolutionary War. In contrast, one man in ten of military age died in the Civil War and one American male in seventy-ﬁve in World War II. Of those who served in the Continental army, one in four died during the war. In the Civil War, one regular in ﬁve died and in World War II one in forty American servicemen perished.

Unlike subsequent wars when numerous soldiers came home with disabilities, relatively few impaired veterans lived in post-Revolutionary America. Those who were seriously wounded in the War of Independence seldom came home. They died, usually of shock, blood loss, or infection. Some survived, of course, and for the remainder of their lives coped with a partial, or total, loss of vision, a gimpy leg, a handless or footless extremity, or emotional scars that never healed.

It was not only soldiers that died or were wounded. Civilians perished from diseases that were spread unwittingly by soldiers and not a few on the homefront died violent deaths in the course of coastal raids, Indian attacks, partisan warfare, and siege operations. There is no way to know how many civilians died as a direct result of this war, but it was well into the thousands.

The British also paid a steep price in blood in this war, one that was proportionately equal to the losses among the American forces. The British sent about

The American Revolution: What Happened to Everyone?

The Beginning Events of the American Revolutionary War