Factory life in the Industrial Revolution 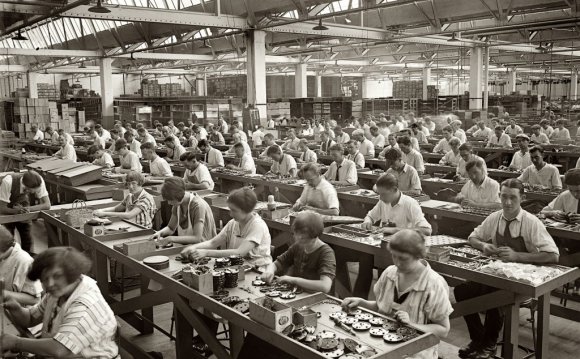 The industrial revolution and the great economic success that accompanied it had a wide variety of victims. As we have previously discussed the American public, through the efforts of trusts, became a victim of the elimination of competition. The consumer was not the only victim however. The American worker was also victimized.

Factories began to replace small "cottage" industries. As the population grew so did wants and needs. Manufacturers realized that bulk production was cheaper, more efficient and provided the quantity of items needed. As a result more and more factories sprang up.

Factory work is very different from other types of labor. The introduction of the factory system had a negative effect on living conditions. Factory owners who believed in Social Darwinism and Rugged Individualism did not care much about those who worked in their factories. They believed that if the workers wanted to improve their; lives they had to do it on their own. Also, because no particular strength or skill was required to operate many of the new factory machines the workers were considered unskilled. This meant they were easily replaced.

The owners of the early factories often were most interested in hiring a worker cheaply. Thus they employed many women and children. These workers could be hired for lower wages than men. These low-paid employees had to work for as long as 16 hours a day; they were subjected to pressure, and even physical punishment, in an effort to make them speed up production. Since neither the machines nor the methods of work were designed for safety, many fatal and maiming accidents resulted.

Factory owners, especially those involved in the steel industry and in the coal mine industry, often would build company towns. Workers were given cheap rent in these towns to go along with there low wages. In essence the worker was trapped. They company town afforded him a place to live and without the job he couldn't leave.

Those in the garment industry worked in sweatshops. Sweatshops were poorly ventilated and lit rooms where seamstresses sat side by side doing piece work (specializing on one piece of the work thus never making a finished product.) The cloth would be piled high, workers were not allowed to talk. Often sweatshop employees where forced to work late into the night so that the job was completed or they wouldn't get paid.

One of the most influential events in labor history was a direct result of sweatshop conditions. The Triangle Shirt Factory Fire killed 114 workers because the fabric could fire and tore through the building. There were no fire escapes and the doors opened out into the hall. The doors where blocked locking the workers in. As result stricter building codes and fire regulations where passed.

Inside the Triangle Factory after the fire

Coal miners also faced difficult work conditions. Mine owners often hired children whose small hands could fit into narrow openings to scrape coal from the mine walls. Working 16 hour days with poor ventilation and frequent cave ins these children might be paid a dollar a day.

It was only a matter of time before these conditions would force change. The question was when. With America embracing a laissez faire philosophy few in government favored interfering on behalf of the worker, of whom many where immigrants. The ideals of social Darwinism and rugged individualism created the mentality that if the workers where to improve their lot in life then they would have to do it themselves, and it wasn't easy!

Life Before the Industrial Revolution

Life During The Industrial Revolution