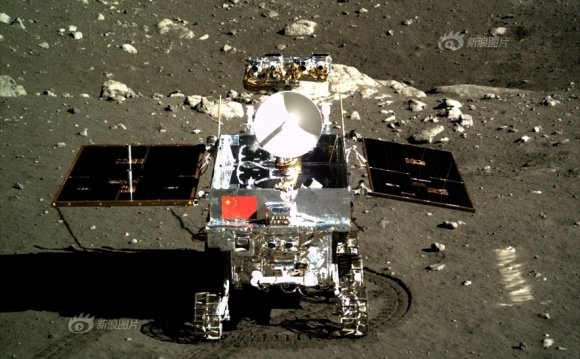 On December 11, 1972, Apollo 17 touched down on the Moon. This was not only our final Moon landing, but the last time we left low Earth orbit. With the successful launch of the Orion capsule, NASA is finally poised to go further again. So it’s important to remember how we got to the Moon — and why we stopped going.

Crewed by Commander Eugene A. Cernan, Command Module Pilot Ronald E. Evans and Lunar Module Pilot Harrison P. Schmitt, the Apollo 17 mission was the first to include a scientist. The primary scientific objectives included “geological surveying and sampling of materials and surface features in a preselected area of the Taurus-Littrow region; deploying and activating surface experiments; and conducting in-flight experiments and photographic tasks during lunar orbit and transearth coast.”

Harrison ‘Jack’ Schmitt had earned his PhD in Geology from Harvard University in 1964, and had worked for the United States Geological Survey and at Harvard University before going through Astronaut training in 1965. Apollo 17 was his first mission into space, and would be the first astronaut-scientist to step on the surface of the Moon. Accompanying him was Eugene ‘Gene’ Cernan, a veteran astronaut who had first flown into space with the Gemini IX-A mission in 1966 and later served as the Lunar Module Pilot for the Apollo 10 mission in May of 1969, where he came within 90 miles of the Lunar surface.

Cernan landed the Challenger Lunar Module in the Taurus-Littrow lunar valley, just to the southeast of Mare Serenitatis, a region of geological significance on the Moon. The mission’s planners hoped that the region would provide a wealth of information about the history of the Moon’s surface. Upon landing, the pair began their own observations of the lunar surface:

After several hours of preparation, Cernan stepped onto the Lunar surface:

The two astronauts unloaded a lunar rover, and began to deploy scientific instruments around their landing site: an experiments package and explosives (to complete seismic experiments begun with other Apollo missions in other locations on the Moon). Their first exclusion in the rover yielded numerous samples of lunar rock. Over the next couple of days, the astronauts completed two additional Moon walks, where they continued to drive across the lunar surface and collect samples.

Schmitt later described the landing site to NASA Oral historian Carol Butler: “It was the most highly varied site of any of the Apollo sites. It was specifically picked to be that. We had three-dimensions to look at with the mountains, to sample. You had the Mare basalts in the floor and the highlands in the mountain walls. We also had this apparent young volcanic material that had been seen on the photographs and wasn’t immediate obvious, but ultimately we found in the form of the orange soil at Shorty crater.”

Why we went to space

The scientific endeavors of Apollo 17 were the culmination of a massive program that had begun in 1963 following the successes of the Mercury Program. In the aftermath of the Second World War, the United States and Soviet Union became embroiled in a competitive arms race that saw significant military gains on both sides, eventually culminating in the development of rockets capable of striking enemy territory across the world. The next step for arms superiority jumped from the atmosphere to Low Earth Orbit to the Moon, the ultimate high ground. As this happened, each country capitalized on the advances in rocket technology to experiment with human spaceflight missions. The Soviet Union succeeded in putting Yuri Gagarin into space in 1961, just a couple of years after launching the first satellite into orbit.

Closely followed by the United States, space became an incredibly public demonstration of military and technological might. The development of space travel didn’t occur in a political vacuum: the drive for the United States to develop rockets and vehicles which could travel higher and faster than their Soviet counterparts happened alongside increasing US/USSR tensions, especially as geopolitical crises such the Cuban Missile Crisis and the US deployment of missiles to Turkey demonstrated how ready each country was to annihilating the other.

As the space program took off, it was supported by other research and scientific efforts from the broader military industrial complex which President Dwight Eisenhower had worried about just a handful of years earlier. (Eisenhower had not been a major supporter of the development of space travel which began under his watch, and had attempted to downplay the significance of Sputnik.) The red hot environment of the Cold War allowed for significant political capital and governmental spending which supported a first-strike infrastructure, and in part, trickled over to the scientific and aeronautical fields, which maintained a peaceful and optimistic message.

By 1966, the space race peaked: NASA received its highest budget ever, at just under 4.5% of the total US federal budget, at .933 billion dollars (around billion today.) The United States had made clear gains in space by this point: Project Gemini had completed its final mission, and with efforts towards the next phase under Apollo were well under way. By this point, the social and political infrastructure and support for space had begun to wane, and would ultimately fall away after Apollo 11 successfully landed on the Moon’s surface in July of 1969.

After this point, NASA continued with planned missions, and eventually landed five additional Apollo missions on the Moon. (Another, Apollo 13, was unable to land after mechanical problems).

Just a year after Apollo 11 landed, NASA began to reprioritize: plans for a space station were revived, and in 1970, they announced that Apollo 20 would be cancelled in favor of the creation of a new venture: Skylab. On September 2nd, 1970, the agency announced the final three Apollo missions: Apollo 15, 16 and 17. The agency was forced to contend with political pressure as well: In 1971, the White House intended to completely cancel the Apollo program after Apollo 15, but ultimately, the two remaining Apollo missions were kept in place. Harrison Schmitt, who had been training for Apollo 18, was bumped up to Apollo 17 after NASA faced pressure from scientists to send one of their own to the Moon.

07 00 00 47: “Bob, this is Gene, and I’m on the surface and as I take man’s last steps from the surface, back home, for some time to come, but we believe not too long into the future. I’d like to Just list what I believe history will record that America’s challenge of today has forged man’s destiny of tomorrow. And, as we leave the Moon at Taurus Littrow, we leave as we come and, God willing, as we shall return, with peace and hope for all mankind. Godspeed the crew of Apollo 17.”

Why NASA Never Went Back to the Moon: The Truth | Humans ...