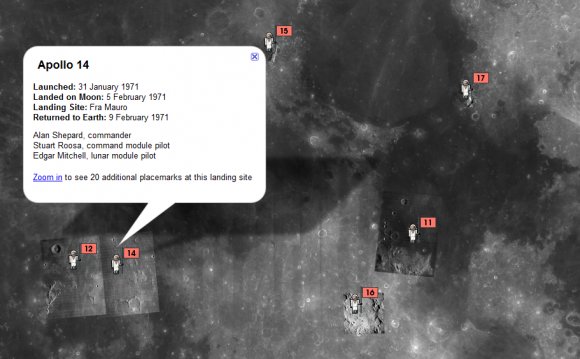 Sunday marks the 45th anniversary of the first Moon Landing when two humans landed on the lunar surface while their colleagues moved along its trajectory.

On 20 July, 1969, the Apollo 11 mission made history when three astronauts, Neil Armstrong, Buzz Aldrin and Michael Collins, took their first steps on the rocky lunar land.

Mission Control, which was monitoring the Apollo 11 mission, recorded the astronauts' excitement on reaching near the moon's surface.

"What a spectacular view!" exclaimed Armstrong when he saw the moon, 100 kilometres above its orbit.

"God, look at that moon! Fantastic. Look back there behind us, sure looks like a gigantic crater; look at the mountains going around it. My gosh, they're monsters, " said Collins while trying to figure out the lunar geography.

To celebrate one of the biggest space achievements, NASA has released pictures, which will help common people spot the Apollo landing sites with the help of binoculars.

But you may not be able to spot the exact landing site as the moon will be in its waning crescent phase.

However, two other sites, including the Apollo 12 and 14, will be visible with the help of a binocular.

The moon is tidally locked to the earth, which means we always see the same lunar surface. This condition also makes it easier to point out the major lunar landmarks, which are situated near the edge of 'Maria', also known as the 'Sea of Tranquillity'.

Apollo 12 Landing Scene (From Earth to the Moon)