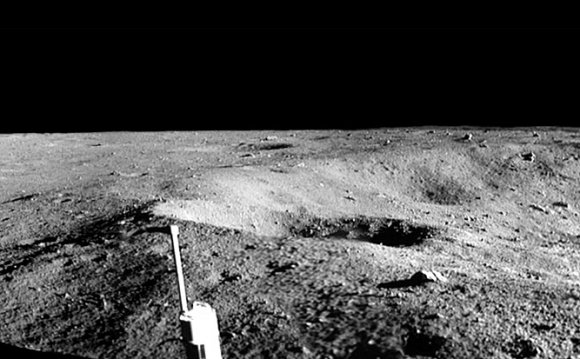 For the first lunar landing, Mare Tranquilitatis was the site chosen because it is a relatively smooth and level area. It does, however, have a high density of craters and in the last seconds before landing, the LM had to be manually piloted by Neil Armstrong to avoid a sharp-rimmed ray crater measuring some 180 meters across and 30 meters deep known as West. The LM landed safely some 6 km from the originally intended landing site.

The Apollo 11 LM landed approximately 400 meters west of West crater and 20km south-southwest of the crater Sabine D in the southwestern part of Mare Tranquilitatis.

The lunar surface at the landing site consisted of fragmental debris ranging in size from fine particles to blocks about 0.8 meter wide.

Images captured by the Lunar Reconnaissance Orbiter Camera (LROC) between July 11 and 15, 2009 show high-resolution views of the Apollo landing sites. Below is the Apollo 11 landing site with the descent stage of the Lunar Module and its shadow indicated by the arrow.

AS - This vertical view above the Apollo 11 landing site was taken from the LM. The CSM is visible right of center.