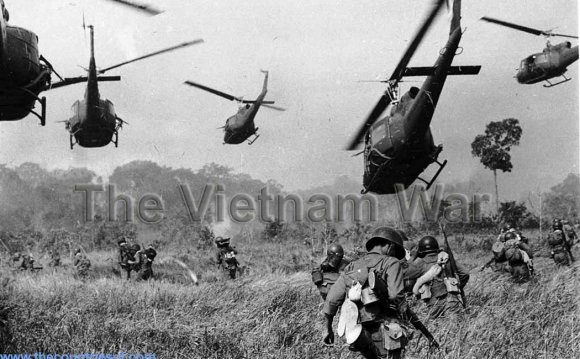 Bows says Fitzgibbon was there when, technically, the U.S. had only military advisers in Vietnam, though he says Fitzgibbon and others were, in his view, clearly in combat. In Bows’ account, some of the flights into Saigon took gunfire from people on the ground.

However, Fitzgibbon was not killed in combat; he was murdered in Saigon.

“After one particularly perilous mission Fitzgibbon had corrected him about his duties and what this radio operator was supposed to be doing versus what he was doing, ” Bows said.

Bows says the radioman shot Fitzgibbon on the front porch of his barracks, just after Fitzgibbon finished passing out a bag full of chewing gum to Vietnamese street kids, something he did after almost every flight.

His death hit his family hard, none more so than his son, Richard Fitzgibbon III, who a few years later joined the Marines and was killed in Vietnam when he stepped on a landmine.

Fitzgibbon III was 21 in 1965, just nine years after his father’s death.

Changing The War’s Start Date, And Adding A Name

This tragic story might have ended there, but for a visit to the Vietnam Veterans Memorial wall in Washington, D.C., by Richard DelRossi, a cousin of the younger Richard Fitzgibbon.

“I think that’s the first time I visited the wall, ” he recalled of his 1988 trip, “and I obviously noticed my cousin’s name … but I couldn’t find my uncle’s name.”

His uncle’s name was not on the memorial because at the time, the Defense Department had declared January 1961 as the official start date of the Vietnam war, and only people killed after that date could have their names engraved.

“I think that’s what started the flame with the family, ” DelRossi said. “I got home and told my mother her brother’s name wasn’t on the wall and right after that she started making calls, we made petitions.”

For nine years family members made calls, met with officials, circulated petitions — only to be told almost every time that rules are rules.

That is until September 1997. That’s when the replica of the wall traveled to Stoneham and Richard Fitzgibbon Jr.’s sister, Alice, met then-U.S. Rep., now-Sen. Ed Markey. As Markey recalls it, she reached out toward the replica, and placed her finger on the son’s name, Richard Fitzgibbon III.

“And she turned to me and she said — while she kept her finger on the wall — that when she touched his name, her nephew, that she could feel his spirit, ” Markey remembered. “But that her brother, Richard’s father, had also died in Vietnam in 1956, but that the Pentagon was refusing to put his name on the wall because they did not accept that the war in Vietnam had begun in 1956.”

Markey immediately took up the cause, but he too ran into roadblocks. The Defense Department refused to budge.

“I was not going to accept failure as an option, ” Markey said. “I realized that a great injustice had been done to the Fitzgibbon family.”

For months, Markey consulted experts. Then one suggested he find a photo of the French departing Vietnam in 1956, leaving support of the Vietnamese government solely to the U.S. At Markey’s request, the French government searched archives and found a photo.

The Department of Defense relinquished and amended the official start date of the war.

“I think it began the kind of closure which a family needs, that the war in Vietnam was over and that finally this family — this family that paid a higher price, a father and a son both losing their life — would finally get the recognition which they deserved, ” Markey said.