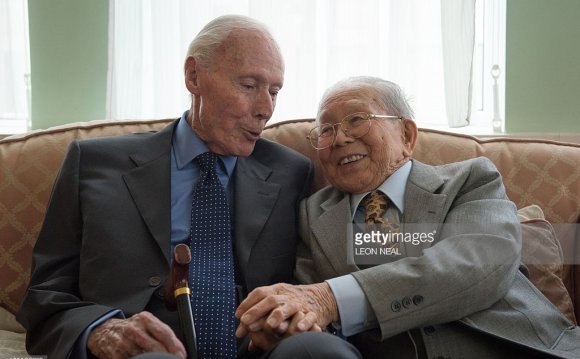 CHRISTIANSBURG, Va. — On his first night in his assisted-living home, Gunter Buhrdorf ate dinner with another World War II soldier.

He was, for the second time in his life, a stranger in a new land. The assisted-living facility staff gave him the open seat at George Williams’s four-person table. They hoped the men, veterans only several years apart in age, would get along.

But Buhrdorf, now 90, was reluctant to share wartime stories with his new dining companion.

Yes, the men were both veterans. But they had fought on opposite sides.

Buhrdorf imagined it would be awkward to explain to Williams, who had been a bomb-dropping Allied pilot in Germany, that he had manned antiaircraft guns for the Nazis.

A memory book of George Williams. (Jay Westcott for The Washington Post)

So he decided, at first, to say nothing.

Then one evening in spring 2013, several weeks after Buhrdorf’s arrival, a few of the men were sitting in the lobby at Commonwealth Assisted Living Facility at Christiansburg swapping stories, as they tended to do many evenings. Williams began reminiscing about the war and flying under heavy German flak fire.

Buhrdorf hesitated. Did he tell his new friends about his own role in the war fighting for Hitler’s army? Would they still treat him the same?

“I was a little bit nervous . . . maybe they don’t know this, and if I open up, then maybe they’ll change their tune, ” Buhrdorf said, his German accent faded but still distinct.

But the veteran’s desire to tell his story overcame his trepidation. He spoke for almost 45 minutes, divulging details of his wartime experience.

No supporter of Hitler

He was only 14 years old when he joined the German army in 1939, he began. His father was a Republican in local government, and they hadn’t supported Adolf Hitler’s rise. Fighting for Germany was for love of country, not its leader, he said.

During the war, the Germans didn’t advertise what was happening to the Jewish people and others in the concentration camps. Buhrdorf remembers the moment, in August 1945 after the war ended, when he first read a newspaper account of the horror that had unfolded. “Why? Why do that?” he recalled thinking then of Hitler. “You turned the whole world against us.”

Historical photos of George Williams, left, and Gunter Buhrdorf from their time in World War II. (JayWestcott for The Washington Post)

“When America got into the war, that’s when things changed. The bombings changed, the size of the attacking force was increased from 50 to 500, ” Buhrdorf said.

Bremen, the northwestern town where his family lived, was leveled.

At 18, Buhrdorf was put in charge of a crew of foreign laborers tasked with building Hitler’s ambitious submarine fleet. They were prisoners, but they were also his men, and Buhrdorf said he saw to it that they were fed.

“Hitler wouldn’t have liked that, ” he said. “That was not to be advertised during the war.”

He also knew that the men were privately organizing in their own native tongues to build the submarines poorly in an attempt to sabotage the German mission. There was little he could do about it.

When the raid alarms would sound, Buhrdorf said, they’d sometimes sleep in the torpedo tubes.

He suffered one injury on his retreat back west: A three-inch-long piece of shrapnel, from a mortar shell, clipped him about two inches below his shoulder on his back when he was dodging enemy fire. It’s his only physical battle scar.

Buhrdorf was taken to a British internment camp on a small island off the coast of England. His clothes were covered with lice, and the food he was given consisted of watered-down cabbage soup. He found dandelions, sea gull eggs and frog legs to eat instead.

There wasn’t much left of Germany after the war, so Buhrdorf joined his brothers, who were already living in America. On his flight over in 1949, he sat in the back of the DC-6 airliner drinking Canadian Club whisky with a group of Norwegians. They dared him to ask a pretty girl sitting up front to dance with him. So he did, and they slow-waltzed on the plane to music playing over the speakers.

When they deplaned, photographers were waiting by the gate. He waved at them, thinking they were there to greet the foreign visitors. But his brother laughed at him. They were there to capture Hollywood starlet Gloria DeHaven, who was returning from a USO show overseas.

Dancing with the actress was his first introduction to America.

He was promised accelerated citizenship if he enlisted in the U.S. Army. Less than two years later, not yet a citizen, he was sent to Korea to fight on behalf of the country that less than a decade before he’d fought against.

“I came to America after seeing all the misery, all the ruins. It was such a calamity that there was absolutely no hope of being happy, as you might say, ” he said. “There was nothing.”

In the years after the war, millions of Germans left the country, both forcibly and voluntarily. Tens of thousands of them, like Buhrdorf, came to America.

Thomas Childers, a history professor at the University of Pennsylvania who has written several books about World War II, said Germans were by and large welcomed warmly. Most Americans didn’t know much about the Holocaust yet, nor did many Germans, and Americans’ residual wartime vitriol was directed at the Japanese because of the bombing of Pearl Harbor. Some of the new immigrants, served in Korea, like Buhrdorf, to gain their U.S. citizenship.