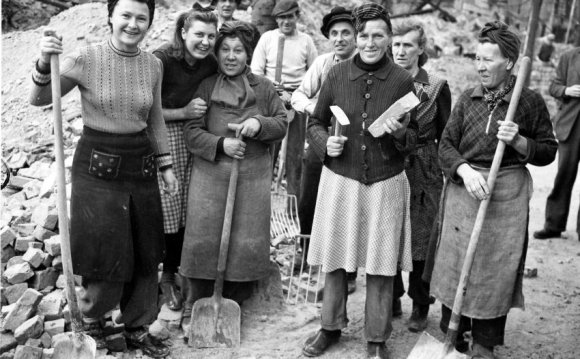 During World War II, women played a crucial role in America as their male counterparts were dispatched on multiple foreign fronts in the Atlantic and Pacific theaters. With an abundance of opportunities available, women filled the jobs that were mostly occupied by men. Many women began working in factories, manufacturing airplanes and working in shipyards; proving that women could perform “men’s work.” Just as women’s role changed during World War II, it would change after the war was over and continue to evolve even today.

The mere thought of women in World War II often conjures up a popular mental image among Americans. “Rosie the Riveter, ” created by J. Howard Miller, is one of the common images associated with women during World War II. [1] With her arm flexed and the phrase “We Can Do it!” emanating from her, this illustration was a perfect propaganda tool utilized by the U.S. Government to boost morale and recruit women into workforce. [2.]

Soon after the end of World War II, men returned home and eventually assumed their pre-war occupations that some women were occupying. This drove women out of the manufacturing and industrial trades they were holding and as the baby boomers boomed, women became full time homemakers. Women were now expected to stay at home and take care of the kids while the husband went to work to financially support the family. [3]

As women were forced out of their wartime occupations and into the domesticity of the new American nuclear family, many women felt disenfranchised. Furthermore, the 1950s are often identified as the pinnacle of gender inequality as women were denigrated and portrayed as “stupid, submissive, purely domestic creatures.” [4.] [5.]

Organizations like the Woman’s Club of Winter Park were areas where women could associate with each other and were crucial venues for feminists. Here, feminist groups aimed to “Advance the social, civic, educational and moral welfare of Winter Park, and also to seek cooperation with other similar clubs to promote knowledge of and interest in the work of women throughout the state and nation.[6]” [7.]

Although the immediate Post-World War II years and the 1950s did not encompass the feminist movement that the 1960s and 1970s did, it is clear that feminism began to percolate in the post-war years.

In this decade, the general assumption as to whether or not the 1950s was a “good” decade can certainly be distorted from a woman’s point of view as women were forced out of respectable roles supporting their male counterparts into the common household becoming a professional homemaker