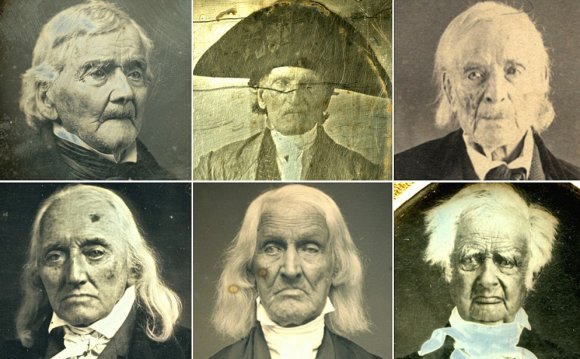 In 1864, 81 years after the American Revolutionary War, Reverend E. B. Hillard and two photographers embarked on a trip through New England to visit, photograph, and interview the six known surviving veterans. They were the last generation that was a living link with the time when the Americans achieved national independence. The Revolutionary War ended in 1783 and photography was invented in the 1820s and 1830s. All of them were over the age of one hundred at the time of their interviews and lived long enough to have their pictures taken. The photos were printed into a book titled The Last Men of the Revolution.

Samuel Downing was born on November 30, 1761, in Newburyport, Massachusetts. At the time his picture was made, he was 102 and living in the town of Edinburgh, Saratoga Country, New York. Samuel enlisted in July of 1780 in Hailstown, New Hampshire at the age 16. Served in the Battle of Saratoga in which British General Burgoyne was defeated. Died February 19, 1867.

Discussing his service in the Continental Army…..” we were stationed in the Mohawk Valley. Arnold was our fighting general, and a bloody fellow he was. He didn’t care for nothing; he’d ride right in. It was ‘Come on, boys!’ ’twasn’t ‘Go boys!’ He was as brave a man as ever lived. He was dark-skinned, with black hair, of middling height. There wasn’t any waste timber in him. He was a stern looking man, but kind to his soldiers. They didn’t treat him right: he ought to have had Burgoyne’s sword. But he ought to have been true. We had true men then; ’twasn’t as it is now. Everybody was true; the Tories we’d killed or driven to Canada…….The men that caught Andre were true. He wanted to get away, offered them everything. Washington hated to hang him; he cried, they said.”