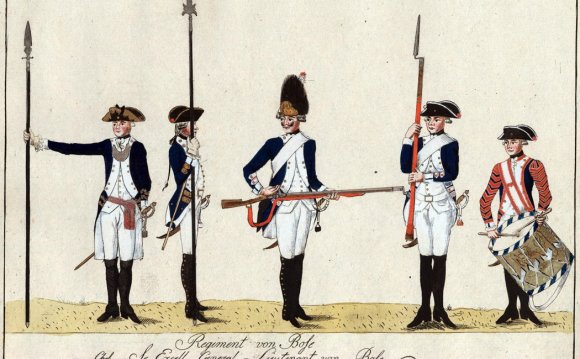 Despite having little experience in commanding large, conventional military forces, Washington’s strong leadership presence and fortitude held the American military together long enough to secure victory at Yorktown and independence for his new nation.

1. Washington was appointed commander of the Continental Army on June 14, 1775. He would not return to Mount Vernon until 6 years later.

On June 14, 1775, the Second Continental Congress, responding to the growing crisis near Boston, directed that one of its own constituents – George Washington – take command of the newly designated Continental Army. Not only did Washington have the most military experience amongst the Congressional delegates, but as John Adams pointed out there were also great political advantages in having a someone outside of New England take command of a military force that was congregated around Boston and largely made up of New Englanders.

Arriving shortly after the conclusion of the Battle of Bunker Hill, Washington moved swiftly to assume command of the ragtag forces surrounding besieging the British garrison within the city of Boston. What Washington did not realize at the time was that it would be six long years of battle, marching, siege, crises, and winter encampments before Washington had an opportunity to return to his beloved Mount Vernon. In September 1781, as the combined American and French forces made their way down to Yorktown, Virginia, Washington was able to make a brief visit to his home along the Potomac River. During this visit Washington and Rochambeau refined their plan for defeating Charles Cornwallis’ forces trapped on the York Peninsula.

2. Prior to his appointment as head of the Continental Army, Washington had never commanded a large army in the field

George Washington was but one of only a handful of candidates considered by the Second Continental Congress who possessed any significant military experience. But by European standards Washington’s experience in commanding large conventional armies was non-existent. Leading up to the French & Indian War, Washington had ably commanded the Virginia Regiment, but this provincial military unit never had more than 2, 000 men in its ranks. In 1754 Washington commanded roughly 100 regulars and 300 militia at the ill-fated Battle of Fort Necessity.

Despite this seeming lack of experience in managing large army formations, Washington brought a number of strengths to his new position as commander of the Continental Army. Washington had learned many important command principles from the British regular officers that he marched with during the French & Indian War and British army manuals that he studied. He also witnessed, firsthand, how vulnerable British formations could be in the rough, timbered frontier land that predominated in North America. His verve, impressive physical presence, and command instincts helped to hold together an ill-equipped force that outlasted his more experienced opponents. And as Benjamin Franklin would famously state, “[a]n American planter, who had never seen Europe, was chosen by us to Command our Troops, and continued during the whole War. This man sent home to you, one after another, five of your best generals, baffled, their Heads bare of Laurels, disgraced even in the Opinion of their Employers.”

So much for conventional experience.

3. Washington and the Continental army narrowly escaped total destruction in the New York campaign of 1776

Unlike the successful Siege of Boston, the efforts to defend the city of New York ended in near disaster for the Continental Army and the cause of independence. In what proved to be the largest battle of the Revolutionary War in terms of total combatants, Washington’s forces on August 22, 1776 were flanked out of their positions atop the Gowanus Heights (part of today’s modern Brooklyn) and soundly defeated by William Howe's roughly 20, 000 man force on Long Island.

Confronted by a powerful British army to his front and the East River to his back, Washington rapidly formulated a risky plan to save his threatened army atop Brooklyn Heights. With the constant threat that the Royal Navy would enter the East River and block his avenue of retreat, Washington ordered that all available flatboats be brought down to his position so that the army could be moved to nearby Manhattan on the night of August 29-30, 1776. Aided by a providential fog that hid the evacuation, Washington was able to successfully move all 9, 000 of his troops to Manhattan without losing a man – a remarkable military feat that astounded his British enemy.

As the New York campaign progressed, Washington’s forces were subsequently defeated at the Battle of White Plains on October 28, 1776 and later at Fort Washington on November 16, 1776. The debacle at Fort Washington cost the Americans 59 killed and another 2, 837 captured. Chased from New York, Washington’s fractured and demoralized army retreated all the way across New Jersey and into Pennsylvania.

It was during these dark days at the close of 1776 that Thomas Paine’s words from the recently published American Crisis rang most true - “These are the times that try men’s souls…the summer soldier and the sunshine patriot will, in this crisis, shrink from the service of their country; but he that stands it now deserves the love and thanks of man and woman.”

Washington’s great triumph against the Hessian forces at Trenton on the December 26, 1776 is one of the best known episodes of the Revolutionary War. (Map: Battle of Trenton) Fearing a counterattack by British regulars, Washington hustled his tired warriors and frozen Hessian captives back to the Pennsylvania side of the Delaware River.