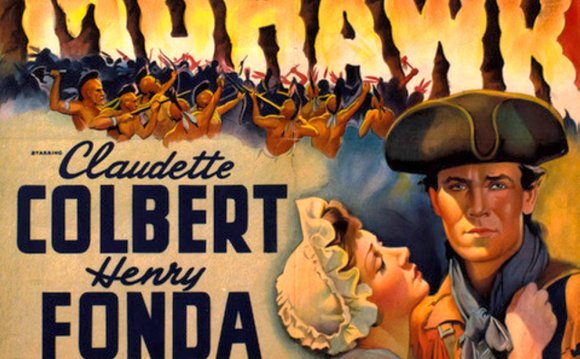 Hollywood has often turned to American history for stirring and patriotic historical films, but the War of Independence has proven to be the most difficult period to portray. This is not because the conflict between Britain and the American colonies lacks exciting vignettes: the Boston tea party, the first shots fired at Lexington, the signing of the Declaration of Independence, and Washington crossing the Delaware are just a few of the noteworthy events that can be dramatised for the screen. Rather, the subject is surrounded by acute sensitivities, and films that engage with it often raise controversies and objections from both critics and audiences.

Another problem lies in having the British as villains. It was not always politic or profitable to portray the USA’s chief ally, and Hollywood’s best export market, as the enemy. The makers of Drums Along the Mohawk avoided these problems by banishing both the founding fathers and the British from the story.

This is a homespun tale rather than a political one, centred on a fictional frontiersman, Gil Martin (Henry Fonda), who marries a city girl, Lana (Claudette Colbert), and takes her to live in a log cabin in the wilds of upstate New York. The film portrays the real brutality of the war in that region: the Martins’ cabin is burnt to the ground, their crops are destroyed, and when Gil joins the local militia he is nearly killed in battle. In the ending, they are cornered with their neighbours in a besieged fort, and escape impending death only when the Continental Army arrives in the nick of time.

Crucially, though, the British are seldom seen and never heard in this film. The enemy is identified as a single American loyalist, who leads a group of Native Americans to terrorise the settlers. Thus, Drums Along the Mohawk seems like a western and, with its sentiment and humour, it fits easily within director John Ford’s body of work.

It is also a visually stunning film, with the then unusual qualities of vivid Technicolor and location shooting (admittedly in Utah rather than New York). Thus, even if it did not please historians, this proved to be the least controversial and most popular of all films set during the revolutionary period.

But is it accurate? Violent battles took place in the Mohawk Valley between 1777 and 1781, and, as in the film, farms were destroyed, civilians were killed, and forts served as shelters. But it is a gross distortion to depict the war solely as one between settlers and Native Americans. The local Iroquois tribes did fight for the loyalist cause, but British troops played a more prominent role than indicated here. Furthermore, the film ignores the fact that the Continental Army and local militias raided and destroyed Iroquois settlements in the region.

A British-made film about the War of Independence was never likely to succeed with American audiences, but the box-office failure of this expensive, high-profile film did not necessarily stem from nationalistic prejudice. Revolution is surprisingly even-handed. True, the American patriots are portrayed as excitable rabble, but the sadistic British are hardly the heroes of the film.

The closest the film comes to having a hero is Tom Dobbs (Al Pacino), an illiterate widower looking after his young son, Ned (Sid Owen). Tom has no political interests, but despite his best efforts to stay out of the war, he becomes caught in the maelstrom. He is treated contemptuously by both sides: the Americans force him to enlist and, after he deserts, a group of British officers use him as their fox and chase him with dogs in a hunting game. Predictably, his conversion to the American side comes when Ned is thrashed by a British officer. Another formulaic element is Tom’s relationship with the rebellious daughter of a loyalist family (Natassja Kinski).

The Southern Strategy of the American Revolutionary War