Journals of the Lewis and Clark Expedition 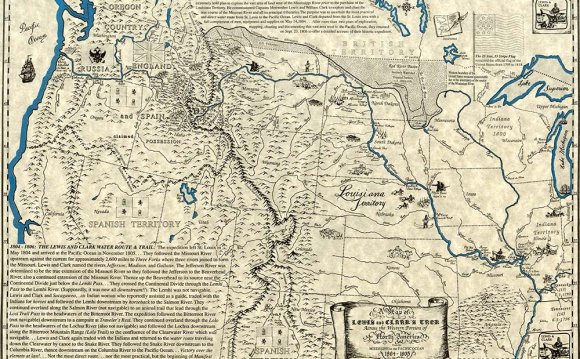 They are So Cautious that I with deficuelty got a Shute at one to day, which I must have killed but Could not get him as he Sunk

We got all our Canoes and baggage below the Great Shute 3 of the canoes being Leakey from injures recved in hauling them over the rocks, obliged us to delay to have them repaired a bad rapid just below us three Indian canoes loaded with pounded fish for the &c. trade down the river arrived at the upper end of the portage this evening. I Can't lern whether those Indians trade with white people or Inds. below for the Beeds & copper, which they are So fond of— They are nearly necked, prefuring beeds to anything— Those Beeds they trafick with Indians Still higher up this river for Skins robes &c. &c. The Indians on those waters do not appear to be Sickly, Sore eyes are Common and maney have lost their eyes, Some one and, maney both, they have bad teeth, and the greater perpotion of them have worn their teeth down, maney into the gums, They are rather Small high Cheeks, women Small and homely, maney of them had Sweled legs, large about the knees, —owing to the position in which they Set on their hams, They are nearly necked only a piece of leather tied about their breech and a Small robe which generally comes to a little below their wastes and Scercely Sufficely large to cover arround them when confined— they are all fond of Clothes but more So of Beeds perticularly blue & white beeds. They are durty in the extreme both in their Coockery and in their houses.

Those at the last Village raise the beads [beds] about five feet from the earth—under which they Store their Provisions— Their houses is about 33 feet to 50 feet Square, the dore of which is about 30 Inc. high and 16 Inches wide in this form cut in a wide pine board they have maney imeges Cut in wood, generally, in the figure of a man— Those people are high with what they have to Sell, and Say the white people below Give them great Prices for what they Sell to them. Their nose are all Pierced, and the wear a white Shell maney of which are 2 Inch long pushed thro the nose— all the women 〈are〉 have flat heads pressed to almost a point at top The press the female childrens heads between 2 bords when young—untill they form the Skul as they wish it which is generally verry flat. This amongst those people is considered as a great mark of buty— and is practised in all the tribes we have passed on this river more or less. men take more of the drugery off the women than is common with Indians—

(Image not available due to copyright restrictions.)

The Clatsop Indians from the Journals of Lewis and Clark ...