Purchase of the Louisiana Territory 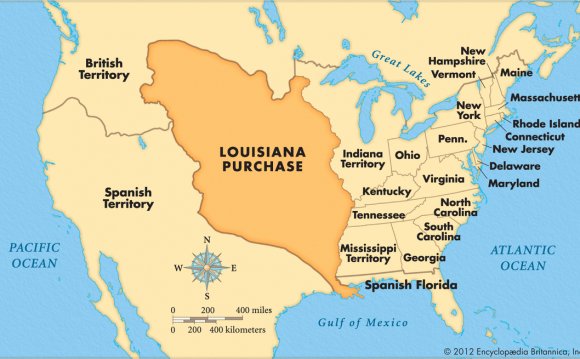 At the beginning of 1803, the United States of America extended only to the Mississippi River, and even then the young nation did not include all the land east of the great waterway.

Beyond the Mississippi, the land - the vast deserts, thick forests, and towering mountains - was claimed by Spain, France, and Great Britain. And it was occupied largely by various Indian tribes.

President Thomas Jefferson had always wanted to know what was out there, what lay between the Mississippi and the great ocean. He had spent years nurturing the idea of an expedition (there were even several attempts) to map the area with a number of objectives in mind, some scientific and commercial, others political and expansionist.

Jefferson envisioned a nation that would grow beyond the original thirteen colonies and espoused the principle that new states should come into the union on an equal footing with the older states, with full rights, wrote Dumas Malone in Jefferson the President: First Term, 1801 - 1805, the fourth volume of his life of Jefferson. "No one more than he deserves to be described as the architect of orderly expansion, " Malone said.

In late 1802, Jefferson was in a position to satisfy his curiosity about the land beyond the Mississippi and was preparing to ask Congress for the money to finance an expedition. However, his pursuit of funds for what became the Lewis and Clark expedition would have to be made carefully, so as not to arouse the suspicions of the other powers that claimed the land as their own.

Meanwhile, the President's attention had been diverted to the issue of control of the port of New Orleans, the gateway to the Mississippi River, which had become an important commercial thoroughfare for what was then the western United States.

The Louisiana Territory, which lay on the west side of the Mississippi and included New Orleans, was then in Spanish hands but had officially been transferred back to France, its previous owner, although the French had not yet arrived to take possession.

To Jefferson, the importance of New Orleans could not be understated. "There is on the globe one single spot, the possessor of which is our natural and habitual enemy. It is New Orleans, through which the produce of three eighths of our territory must pass to market, " he wrote to Robert Livingston, his ambassador to France, early in 1802.

The President was concerned that French control of New Orleans, in contrast to Spanish control, might pose a threat to western Americans seeking to send trade through the port. To assure that it would remain open, Jefferson decided to try to buy it from the French. He dispatched James Monroe to France and Spain as "minister extraordinary and plenipotentiary" with power to buy New Orleans from Napoleon, who was readying for war in Europe and clearly needed money. Monroe was also authorized to buy Florida from Spain. Congress agreed to up to ten million dollars for the purchases, and Monroe had free rein to deal with the French or the Spanish.

Even as he sought to resolve the difficult New Orleans situation, Jefferson did not neglect his dream of an expedition to explore the territory between the Mississippi and the Pacific Ocean. He even had a person in mind as leader of the expedition, Meriwether Lewis. Jefferson had spent much time teaching Lewis all the things Lewis would need to know if he led an expedition up the Missouri River, through the Indian territories, and across the mountains.

Although Jefferson's initial concerns were with what the Spanish and French might have in mind for New Orleans and the Louisiana Territory, it was a book by Alexander Mackenzie that spurred him to move more quickly on plans for the expedition. Mackenzie, a Scotsman working for a Canadian trading company, had explored across the Canadian Rockies and had finally encountered salt water in the Strait of Georgia, an inlet near what is now the city of Vancouver, British Columbia. He subsequently wrote a book about his exploration.

Jefferson and Lewis devoured Mackenzie's book, and it had a crucial impact. "It was also a warning that, if the United States did not get going, it would lose the western empire to the British before the game was well under way, " wrote Stephen E. Ambrose in Undaunted Courage, his account of the Lewis and Clark expedition. "The news that the British were threatening to set up shop in the Northwest galvanized Jefferson into manic activity and changed Meriwether Lewis' life overnight."

But an expedition of this nature would be costly, headed even by the best prepared of men, so Jefferson needed to ask Congress for funding. Lewis provided an estimate: $2, 500.

The President planned to ask Congress for the $2, 500 in his budget message in early 1803, but his treasury secretary, Albert Gallatin, cautioned against it, recommending instead a confidential message, since the expedition would enter lands claimed by other countries and it would be unwise to needlessly antagonize foreign powers. In this case, that meant the British, who claimed land in what is now the Pacific Northwest, and the Spanish, who still controlled the Louisiana Territory since the French had not yet arrived to take possession.

Taking Gallatin's advice, Jefferson prepared a special, and secret, message and sent it to Congress on January 18, 1803. Most of the message was a long discussion of relations with the various Indian tribes in the west and how they traded with other powers, especially the British.

He began his message with a discussion of Indian tribes living within the borders of the United States and how reluctant they were to give up land: The Indian tribes residing within the limits of the United States have for a considerable time been growing more & more uneasy at the constant diminution of the territory they occupy, altho' effected by their own voluntary sales: and the policy has long been gaining strength with them of refusing absolutely all further sale on any conditions, insomuch that at this time it hazards their friendship and excites dangerous jealousies and perturbations in their minds to make any overture for the purchase of the smallest portions of their land.

Jefferson then proposed two measures aimed at reducing the opposition of the tribes to selling some of their land for money or supplies. He proposed getting them to give up hunting as a means of finding food and instead developing their agriculture (livestock and crops) "and thereby prove to themselves that less land & labor will maintain them in this better than in their former modes of living." And to get them interested in trade with the white man, Jefferson suggested developing in the Indian tribes "the wisdom of exchanging what they can spare & we want, for what we can spare and they want." The result would be less need for vast expanses of land, which Jefferson envisioned for new settlers from the eastern states.

While on the subject of trade with the Indian tribes, Jefferson noted that those tribes on the Missouri River, which ran through the heart of Louisiana Territory, were then already trading with other nations, including the British. He then suggested an expedition into Louisiana (foreign territory) to find a good water route across the continent that would be a better trade route than the British could offer through Canada.

Jefferson framed the idea of an expedition as a trade mission, which would also allow its members to observe the uncharted region and map it:

An intelligent officer, with ten or twelve chosen men, fit for the enterprise and willing to undertake it, taken from our posts, where they may be spared without inconvenience, might explore the whole line, even to the Western ocean, have conferences with the natives on the subject of commercial intercourse, get admission among them for our traders as others are admitted, agree on convenient deposits for an interchange of articles, and return with the information acquired in the course of two summers. . . . The interests of commerce place the principal object within the constitutional powers and care of Congress, and that it should incidentally advance the geographical knowledge of our own continent can not but be an additional gratification.

Jefferson then raised the real reason for his "confidential" message: "The appropriation of two thousand five hundred dollars 'for the purpose of extending the external commerce of the US, ' while understood and considered by the Executive as giving the legislative sanction, would cover the undertaking from notice and prevent the obstructions which interested individuals might otherwise previously prepare in its way."

Even as Jefferson wrote this message to Congress, events in Paris that would affect his plan were unfolding rapidly.

In the spring of 1803, the French foreign minister, Talleyrand, surprised Livingston by advising him that not only New Orleans, but the entire Louisiana Territory, was for sale. Napoleon's interests were now in Europe, not in the Americas, and he needed the money. Livingston and Monroe, who had arrived in France by then, even without authority from Jefferson or Congress, took up Talleyrand's offer and purchased all of Louisiana for fifteen million dollars, a deal that was signed April 30, 1803.