Where was World War Two? 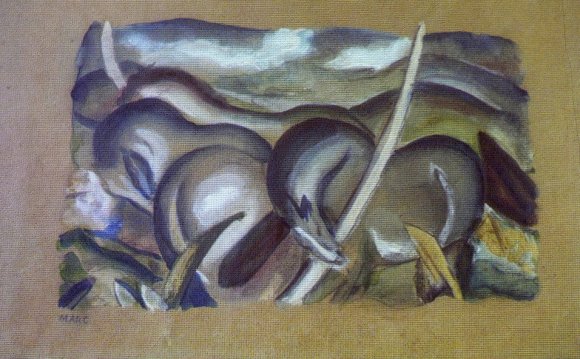 Dec. 7, 1941: The USS West Virginia is aflame after the surprise attack by the Japanese on Pearl Harbor, Hawaii.

Dec. 7, 1941: The USS Arizona burns after the surprise attack by the Japanese on Pearl Harbor, Hawaii. The Arizona became the final resting place for many of the 1, 177 crewmen who lost their lives in the attack.

1943: This is a copy of a German photograph that shows Jewish civilians being marched down a street during the destruction of the Warsaw ghetto in Poland. Before World War II, the city was a major center of Jewish life and culture in Poland. Warsaw's prewar Jewish population of more than 350, 000 constituted about 30 percent of the city's total population.

November 20-23, 1943: Marines storm the Tarawa atoll in the Gilbert Islands in the central Pacific Ocean.

November 1943: Two enlisted men from the U.S. Navy aircraft carrier Liscome Bay, which was torpedoed by a Japanese submarine off the Gilbert Islands, are buried at sea from the deck of a Coast Guard manned assault transport.

February 1944: These pilots are part of a U.S. Army Air Forces fighter squadron credited with shooting down eight of 28 German planes destroyed in dog-fights over the new Allied beachheads south of Rome, on Jan. 27, 1944, talk over the day's exploits at a U.S. base in the Mediterranean theater. Members of this squadron, veterans of the North African and Sicilian campaigns, were formerly classmates at a university in the southern United States.

May 18, 1944: American troops of the 163rd Infantry Regiment hit the beach from Higgins boats during the invasion of Wadke Island, Dutch New Guinea.

June 6, 1944: Supreme Allied Commander Gen. Dwight D. Eisenhower gives the order of the Day, 'Full victory-nothing else' to paratroopers in England, just before they board their airplanes to participate in the first assault in the invasion of Europe on D-Day.

June 10, 1944: A platoon of black troops surrounds a farm house near Vierville-sur-Mer, France, as they prepare to eliminate a German sniper holding up an advance from the Omaha beachhead.

Aug. 29, 1944: American troops of the 28th Infantry Division march down the Champs Elysees, Paris, in a Victory Parade.

September 1944: Parachutes open overhead as waves of paratroops land in Holland during operations by the 1st Allied Airborne Army.

Oct. 20, 1944: Army Gen. Douglas MacArthur wades ashore during initial landings at Leyte in the Philippine Islands. With U.S. troops still fighting, MacArthur addressed the Philippine people via radio: 'I have returned. By the grace of Almighty God our forces stand again on Philippine soil – soil consecrated in the blood of our two peoples.'

April 22, 1945: Soldiers of the 55th Armored Infantry Battalion and a tank from the 22nd Tank Battalion, move through a smoke-filled street in Wernberg, Germany.

May 7, 1945: A jubilant American soldier hugs an English woman and victory smiles light the faces of happy service men and civilians at London's Piccadilly Circus as they celebrate Germany's unconditional surrender.

May 18, 1945: A Marine of the 1st Marine Division draws a bead on a Japanese sniper with his tommy-gun as his companion ducks for cover. The division was working to take Wana Ridge before the town of Shuri on Okinawa.

Aug. 8, 1945: A dense column of smoke rises more than 60, 000 feet into the air over the Japanese port of Nagasaki, the result of an atomic bomb, the second ever used in warfare, dropped on the industrial center from a U.S. B-29 Superfortress.