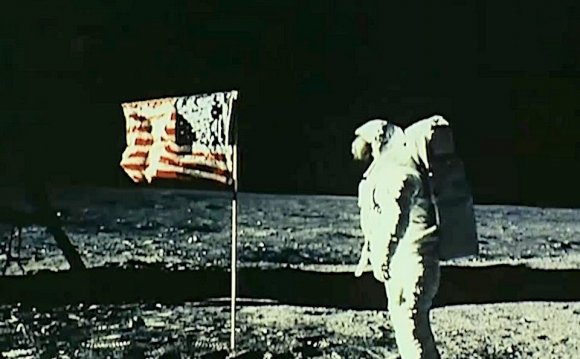 No, the Apollo 11 moon landing wasn’t a hoax. And we can prove it.

Rather, our game demo team already did. By using Maxwell, our new GPU architecture, to digitally rebuild one of the landing’s iconic photographs – Neil Armstrong’s shot of Buzz Aldrin clambering down the lunar module’s ladder.

The photo, taken 45 years ago, shows Aldrin lit against the dark shape of the lunar module behind him. It’s a good shot. Too good, conspiracy theorists claim.

Their argument: because the sun is behind the lunar module, and Aldrin is in its shadow, Aldrin must have been lit by something other than the sun. Some auxiliary light source. Maybe in a back-lot studio. Perhaps somewhere in L.A.

Pretty swiftly, our team debunked the debunkers. Their secret weapon: Maxwell, the new graphics architecture we’re introducing today. We designed Maxwell to solve some of the most complex lighting and graphics challenges in visual computing. Maxwell is at the heart of our new GeForce GTX 980 and GeForce GTX 970 GPUs, the most advanced GPUs ever made.

[Update: Want to try your hand at debunking a conspiracy? Read more about our demo, and download it—and decide—for yourself.]

Thanks to Maxwell, our demo team rebuilt the scene of the moon landing in Unreal Engine 4, a game engine developed by Epic Games. They simulated how the sun’s rays, coming from behind the lander, bounced off the moon’s surface, and Armstrong’s suit, to cast light on Aldrin as he stepped off the lander.

“Men lost their lives as part of the Apollo project, so it bugs me when people say it was all a hoax, ” says Daly, an NVIDIA veteran. “People risked their lives to get to the moon.”

Out of the Box

To understand our demo team’s discovery, it helps to know the workings of one of Maxwell’s key technologies – Voxel-Based Global Illumination, or VXGI. VXGI is about better representing the way light bounces from one object to another in real time.

Video: Landing on the moon | Apollo 11