First astronauts to landing on moon 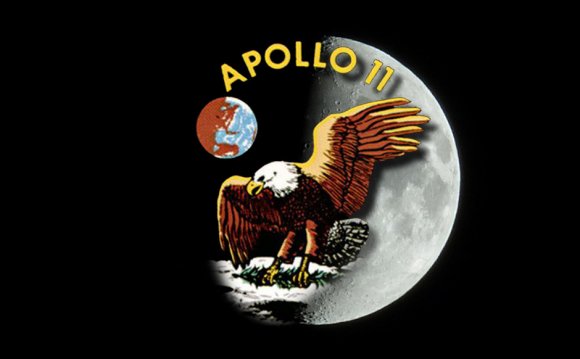 December 5, 1961. A man at the controls of a module gazes at the lunar surface from close up. Is this an astronaut, approaching the Moon nearly eight years before Apollo 11? Nope—it’s a pilot testing Project LOLA, a massive network of hand-painted mosaics and tracked cameras that trained astronauts for the moon landings.

Test subject on a gantry overlooking the simulated lunar surface during an early test-run of Project LOLA.

Fifty-four years ago, we tested out Project LOLA—the Lunar Orbit and Landing Approach simulator—at the Langley Research Center in Virginia. The pilot perched on a gantry, peeking out the cockpit at a close-circuit TV system that tracked along detailed lunar mosaics in response to their commands.

Artists used a mix of hand-painting and airbrushing to create the massive lunar murals for the simulator.

NASA constructed four models at different scales, so the cockpit could track over the murals simulating a landing. The largest was on a six-meter (20-foot) diameter sphere, simulating the lunar surface from an altitude of 322 kilometers (200 miles) so every 1 centimeter covered 5.7 kilometers (1 inch per 9 miles). The three smaller full-relief scaled sections at 4.5 meter (15 feet) by 12 meter (40 feet). The final model of Crater Alphonsus scaled to just 1 centimeter for every 61 meters (1 inch to 200 feet). The lunar surfaces were created by carefully hand-painting and airbrushing the surfaces using detailed photographs taken from earlier lunar missions.

Model 1 was a massive 6-meter (20-foot) diameter sphere, simulating the lunar surface from an altitude of 322 kilometers (200 miles) to a scale of 1 centimeter covered 5.7 kilometers (1 inch per 9 miles).

Construction of Model 1 prior to being outfitted with a hand-painted mosaic of the lunar surface.

Scaffolding and surfaces for Model 2 (foreground) and Model 1 (background) with the camera track.

Lifting a lunar surface model into position on its scaffolding.

A typical test run lasted an hour with the pilot in the cockpit controlling how the television cameras tracked along the models. The mission started with the cart positioned on Model 1, establishing the translunar approach and orbit. During descent, the television feed switched to a second camera on Model 2 while the first camera was shuffled over to Model 3. The simulation cut out around a hundred meters (few hundred feet) from the “surface” to prevent the camera from bumping against the models.

Test subject in an early version of the cockpit testing out the simulator’s control system ability to move cameras along the track.

Artist using the camera track as a scaffold for painting the surface of Model 2.

The three relief models were machined styrofoam painted to match the lunar surface.

The lunar module cabin allowed a 45° field of view over four windows; the simulator’s projection screens covered a broader 65° field of view. The lunar surface was rear projected using four Schmidt television projectors. Anywhere not covered by the “lunar surface” was a starfield created by front-projecting a four-axis starfield generator (starball) mounted above the cabin.

This is what the view looked like to the astronauts using the Project LOLA simulator:

A pair of Langley employees theorized that computer-controlled navigation would be insufficient to land on the moon, so they advocated for this $2 million dollar simulator. It was intended to familiarize astronauts with the alien surface, hopefully helping them identify visual cues that would let them aid the programs.

Apollo astronauts started using the simulator in 1964, but after the first moon landings they realized it wasn’t actually necessary. The simulator was soon decommissioned, and removed entirely by 1978.

Moon Landing Hoax Apollo 16 : Astronauts Sneak up on a ...

The Eagle Has Landed - Nixon Talks to Astronauts on the Moon