When did the American Revolutionary War Start 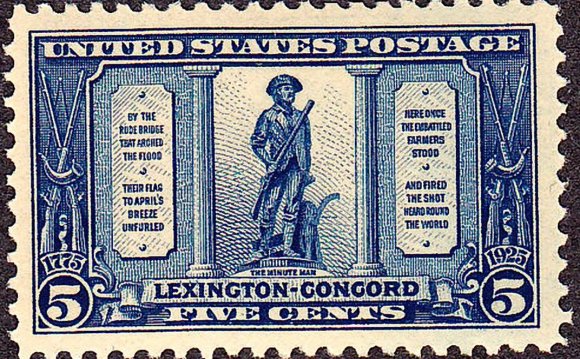 The opening shots of the American Revolution were fired in the center of Lexington, Massachusetts on the morning of April 19, 1775. One British soldier was wounded, while eight men of Lexington fell dead. This tragic exchange of gunfire would trigger the American Revolution, a war that would last for eight long years and would result in the birth of the United States of America.

The colonists who gathered on Lexington Green that day weren't planning to start a war. On the contrary, the British were on their way to Concord - not Lexington! But the militia of Lexington turned out on the Green, so that the British army would see them as they marched by. It was intended as a show of force, a demonstration of colonial resolve.

The British were headed to Concord to secure arms and munitions reportedly being stockpiled. Lexington was on the way. Captain John Parker turned out his Lexington Company of the Middlesex County Brigade of the Massachusetts Militia to stand in the center of Lexington as the British would (he thought) pass by. Parker's men ranged in age from 18 to 63 and his unit numbered just under 80 men, most of whom were farmers.

The British were not in the mood for such a display. Seeing the colonials turned out, their 700-man force turned off the road to Concord and marched into Lexington.

Seeing the British approach, Parker proclaimed to his men: "Stand your ground! Don't fire unless fired upon. But, if they want to have a war, let it begin here."

The commander of the British advance guard ordered the militiamen to lay down their arms. Seeing that he was overwhelmingly outnumbered, Parker gave the order to disperse. As the colonial militia began to back away, a shot rang out. It remains a mystery to this day as to who fired that shot!

Eight Americans were killed. Nine were wounded. The British suffered one minor casualty and resumed their march to Concord. The grieving citizens of Lexington would never be the same, and neither would New England - or, for that matter, all of North America.

Whoever fired the shot, though, triggered more than a local skirmish. He started what became a global war!

Did Freemasons Create The USA?