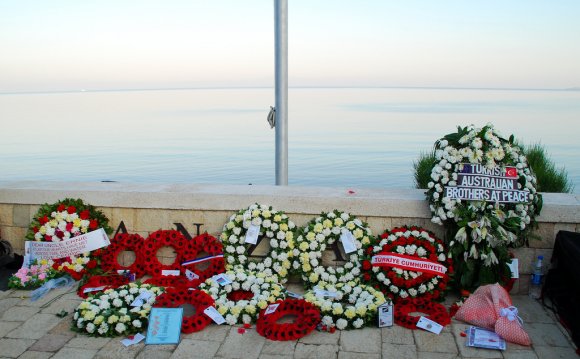 Created by an Act of Congress in 2013, the World War One Centennial Commission seeks to bring national attention to “America’s forgotten war” on its 100th anniversary through the construction of an official World War I memorial in Washington, DC. According to the commission, World War I remains underappreciated in the public understanding of US history “even though more Americans gave their lives during that war than during Korea and Vietnam combined and even though it profoundly shaped the rest of ‘the American century.’”

Designed by architect-in-training Joe Weishar and sculptor Sabin Howard, “The Weight of Sacrifice” will transform Pershing Park, which presently memorializes WWI general John Pershing, into a tribute to veterans who fought in the Great War. The design concept features a raised lawn separated from an urban plaza by an elaborate bronze bas-relief wall. Commission vice chair Edwin Fountain noted that the design’s “classical sculptural style” accompanied with quotations would be both “recognizable to those alive during the war” and consistent with contemporary landscape design principles. Other elements of the design are more subtle—according to the design overview, “each cubic foot of the memorial represents an American soldier lost in the war; 116, 516 in all.”

The selection process for the winning design was long and arduous. The open design competition attracted over 350 entries out of which five finalists were selected and announced in September 2015. According to the jury’s Stage II Report, deliberations “addressed philosophic design approaches, stylistic genres, functional and symbolic attributes, and the potential of each design concept to retain its integrity as it moves through the rigorous review and approval processes associated with the making of memorials in Washington, DC.” The jury unanimously selected “The Weight of Sacrifice” and its design team, while commending other design entries that included a large neoclassical memorial building and a park featuring sunken “family portraits.”

At the press conference announcing the winning concept, Libby O’Connell, commissioner of the Centennial Commission and chief historian emeritus of HISTORY/A+E Networks, dismissed any skepticism about the need for another national memorial to a war whose last American veteran died in 2011. O’Connell stressed that World War I played a pivotal, and often underappreciated, role in driving forward some of the nation’s most significant social movements. She also referred to the “long shadow” cast by the Sykes Picot Agreement, which ended the war but ushered in a series of conflicts in the Middle East that continue to this day.

Rep. Emmanuel Cleaver (D-KS) also emphasized that the new memorial would remind visitors of a history they might be unaware of. However, in a city crowded with memorials, it still remains unclear whether there is an actual need for a national memorial devoted to World War I or how the design itself will facilitate greater public understanding of the country’s involvement in the war. Because the memorial at Pershing Park will also serve as a functioning public park that sits at the intersection of DC’s National Mall and its busy downtown, the design concept is focused more on public use than public engagement. As it stands, the current design offers little in the way of on-site explanation or contextualization, a familiar problem with national memorials.