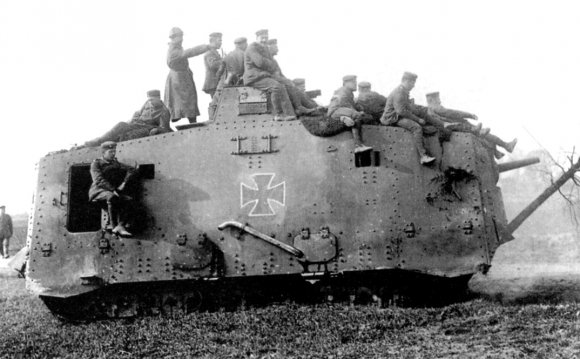 The tank had an interesting role in World War One. The tank was first used at the little known Battle of Flers. It was then used with less success at the Battle of the Somme. Though the tank was highly unreliable – as one would expect from a new machine – it did a great deal to end the horrors of trench warfare and brought back some mobility to the Western Front.

A World War One tank

The idea of the tank came from a development of farming vehicles that could cross difficult land with ease by using caterpillar tracks. However, the British army’s hierarchy was dominated by officers from the various cavalry regiments that existed. At the start of World War One, the first engagement between the British and Germans had involved cavalry near Mons. This seemed to emphasise the importance of such regiments. However, trench warfare had made the use of cavalry null and void. Cavalry engagements fought in mud proved very costly and from a military point of view, hopeless. Despite this seemingly obvious fact, senior military commanders were hostile to the use of armoured vehicles, as they would have challenged the use of cavalry in the field.

The leading light in support of the tank was Lieutenant-Colonel Ernest Swinton. In 1914, he had proposed the development of a new type of fighting vehicle. In fact, it is a common misconception that no fighting vehicles existed in August 1914. The Germans, British, Austrians, Russians and French all had armoured fighting vehicles that could fight on ‘normal’ terrain. But these vehicles could not cope with trenches that were soon to dominate the Western Front. Caterpillar tracked vehicles were already in France as the British used them as heavy gun tractors.

Swinton had received some support from those in authority but many in the army’s General Staff were deeply suspicious. Swinton needed an example of the machine that he believed would alter warfare on the Western Front. By June 9th 1915, agreement was made regarding what the new weapon should be. It should:

One supporter of the prospective new weapon was Winston Churchill. However, by the end of 1915, his name was not held in high esteem because of the Gallipoli fiasco.

As the stalemate on the Western Front continued, so the drive to find a weapon that could break this lack of mobility became more intense. Most of the original designs were based on designs from the Holt tractor company. However, their vehicles were designed to operate on muddy land but not the churned up landscape of the Western Front. The first ‘tank’ to have any form of caterpillar track was a vehicle designed by Lieutenant W Wilson and William Tritton called “Little Willie”. “Little Willie” was never designed to fight but to serve as a template for development. “Little Willie” developed in to “Big Willie” which started to bear a resemblance to the first Mark 1 seen in the photo. “Big Willie” was rhomboid in shape and had guns mounted in blisters on the sides of the hull.