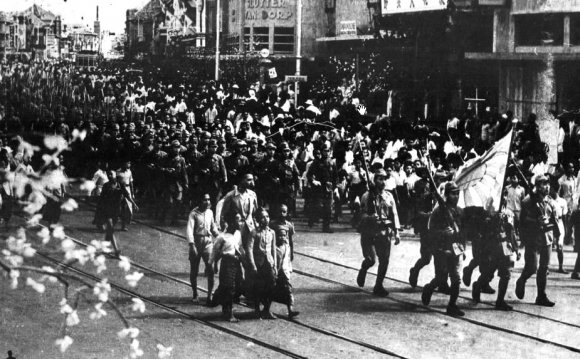 World War II, fought in parts of Europe, the Middle East, East Asia and Africa between 1939-1945, was the most destructive war in history, claiming the lives of more than 60 million military personnel and civilians.

This section features timelines and chronological accounts to give you a straightforward .

has the most comprehensive description of the events, people, weapons and equipment, and countries of World War II.

traces the war in Europe from the end of World War I to the Nuremberg trials. Features include detailed descriptions of various stages of the war, with animated maps, photographs, games and a detailed timeline of D-Day. provides a summary of World War II with a good deal of audio and video. It also includes biographies and battle maps. has a timeline of World War II, with short entries for most events. was created by a history professor from the University of San Diego. It covers a larger period than The History Place (dating back to 1917), but its entries are shorter.

is a collection of accounts and primary source documents created by U.S., U.K. and British Commonwealth government agencies.

provide articles on World War II from publications such as World War II magazine, Military History magazine and MHQ: The Quarterly Journal of Military History. provides the Army’s official history of World War II, with extremely detailed accounts of the Army’s actions in the European, Mediterranean, Middle Eastern and Pacific theaters. has a large collection of collections, exhibitions, on this day features, and other resources on World War II. features first-person accounts of prominent events, along with a simple explanation of the event’s importance.

Soon after becoming chancellor of Germany in 1933, Adolf Hitler began instituting a series of anti-Semitic laws and interning Jews. By the end of the war in 1945, an estimated 6 million European Jews had perished in concentration camps. Learn more about the Holocaust through these extensive Holocaust resources.

has a collection of exhibits telling the stories of the victims of the Holocaust. It also includes an archive of primary source documents, and articles and podcasts discussing the legacy of the Holocaust and Holocaust denial.

includes witness testimony, virtual tours of concentration camps, essays and interviews with historians, and large collection of photos and artwork. has compiled a collection of resources for teachers, including primary source documents, photos, video, quizzes and a list of Holocaust museums.

Fighting in the Pacific Theater of World War II began with the Japanese bombing of Pearl Harbor and ended with the United States dropping atomic bombs on Hiroshima and Nagasaki.

provides articles on Pearl Harbor, kamikaze fighters, the Guadalcanal battles and the invasion of Peleliu. It also features interviews with two U.S. soldiers, and an account of the bombing of Hiroshima from a German priest.

provides easy-to-follow animations of key battles in the Pacific, with a short description of each battle.

The United States developed the world’s first atomic bomb between 1942-1945. In August 1945, it dropped atomic bombs on the Japanese cities of Hiroshima and Nagasaki, bringing an end to World War II and changing modern warfare forever. This section contains atomic bomb resources for information about the science and people behind the weapon.

is an independent institute located at The George Washington University, which presents documents to the public after they have been declassified by the government. In addition to providing a general overview of the atomic bomb during World War II, the site lists a number of documents from the time.

, from the Contra Costa County Office of Education, is a resource for teachers and students that devotes coverage to the science and scientists behind the atomic bomb.
Source: www.findingdulcinea.com