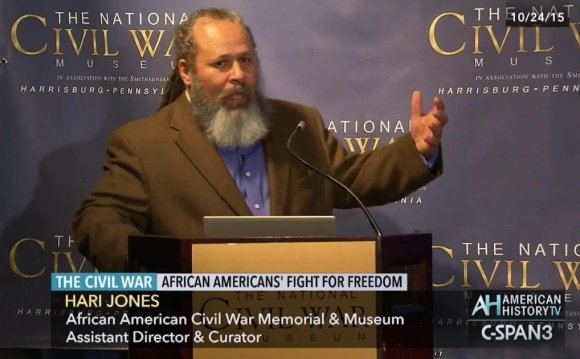 The May 1, 1863 New York Tribune summed up many Northerners' feelings about African American soldiers when it declared, "Loyal Whites have generally become willing that they should fight, but the great majority have no faith that they will really do so. Many hope they will prove cowards and sneaks - others greatly fear it." In their first major battle, at Port Hudson, Louisiana on May 27, 1863, African Americans proved their courage beyond a doubt.

Port Hudson served as the linchpin of Confederate control over the Lower Mississippi. Among the Union regiments attacking the well-fortified position were two African American units: the First Louisiana - which was one of the few units commanded by African American officers - and the Third Louisiana. Although they did not inflict a single casualty on the enemy, the units showed conspicuous bravery, charging repeatedly against blistering artillery and rifle fire. All told, the two regiments sustained nearly 200 casualties. Among those impressed that day was Union general Nathaniel P. Banks, who reported, "The severe test to which they were subjected, and the determined manner in which they encountered the enemy, leaves upon my mind no doubt of their ultimate success."


In one of the bloodiest battles of the war, African American troops from the 9th Louisiana Infantry, the 1st Mississippi Infantry, and the 13th Louisiana Infantry fought alongside white troops from the 10th Illinois Cavalry and the 23rd Iowa Infantry. The most seasoned of the black troops had been soldiers for only about a month. But they engaged attacking Confederates in fierce hand-to-hand combat, fighting with bayonets, fists, and rifle butts, or firing their weapons at extremely close range. Finally, with their backs to the Mississippi, they received the support of a Navy gunboat, and their line held.

Brigadier General Henry McCullough, who commanded the Confederate forces, later noted that his "charge was resisted by the negro portion of the enemy's force with considerable obstinacy, while the white or true Yankee position ran like whipped curs almost as soon as the charge was ordered." The African American troops paid dearly for their bravery. Heaviest hit was the 9th Louisiana Infantry. Almost 45 percent of the unit's men were killed or mortally wounded - the highest percentage of a regiment killed in a single battle in the entire war.

African American soldiers and white officers from across the North comprised the celebrated Massachusetts 54th Regiment. Like most African American units, the 54th was led by a white man, a blue-blood named Robert Gould Shaw, who had years of military experience but little of it in battle. Two sons of abolitionist leader Frederick Douglass also joined the regiment, as did a grandson of Sojourner Truth.

Fort Wagner, an island stronghold that protected the harbor of Charleston, South Carolina, presented a significant obstacle to Union forces. Defended by the sea, a marshy shoreline, Confederate artillery batteries on nearby islands, and a three-foot moat, it was close to impregnable. A first Union assault, on July 10th and 11th, had ended in failure. Shaw volunteered his men to lead the second attack on Wagner, and on the night of July 18, in complete darkness, they started across the sand in the face of rebel artillery. Shell blasts tore huge holes in the ranks, but the men closed them and marched on, eventually breaking into a charge. Deadly Confederate fire raked the attackers from three sides, but a number of troops breached the fort's outer walls before being driven back. Wounded numerous times, Shaw fell dead just outside.