South Carolina in the American Revolution 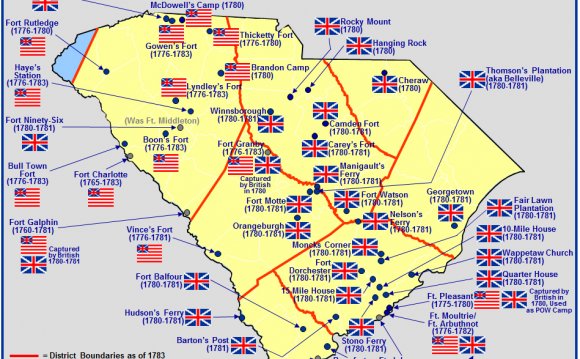 South Carolina, like her sister colony to the north, saw the rise of partisan groups over the years before the outbreak of fighting with Britain. The "Tories" were the conservative force, grateful for the protection afforded their commercial interests by the British navy. "Whigs", the patriot element, also included leading merchants, but were energized in opposition to the British policies put forth in the Stamp Act, Townshend Acts and the Boston Port Bill. At least 100 battles took place in South Carolina during the War for Independence. The initial engagement centered around British efforts to seize Charles Town in June 1776, when the Americans held off combined land and sea forces at the Battle of Fort Moultrie. A second British assault failed in 1779, but a follow-up the following year succeeded.

American forces suffered a serious setback in the Battle of Camden in August 1780. General Horatio Gates’ nighttime march failed to surprise the British. The Americans suffered nearly 1, 000 soldiers killed or wounded and about the same number captured. The resulting withdrawal left most of South Carolina in British hands.

The tide turned in America’s favor in the victories at Kings Mountain (October 1780) and Cowpens (January 1781). Later in 1781, Nathanael Greene commenced a drive that pushed the main British force out of South Carolina, through North Carolina and into Virginia. Smaller British contingents remained behind and participated in the continuing struggle between the Whig and Tory soldiers.

See timeline of the American Revolution.

Nathanael Greene: A Biography of the American Revolution by Gerald M. Carbone.

The Battle of Cowpens - South Carolina

[PDF Download] Roster of South Carolina Patriots in the ...

The ReVolution (Clemson vs. South Carolina 2013)