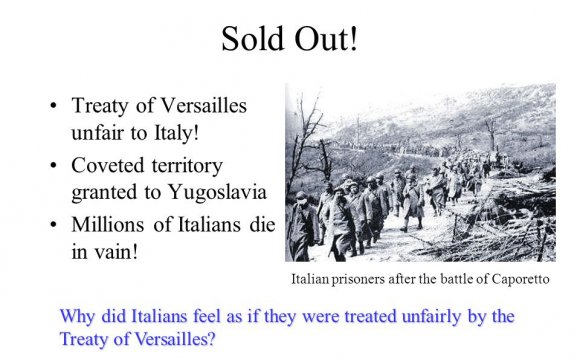 In the years that led up to World War One, Italy had sided with Germany and Austria-Hungary in the Triple Alliance. In theory, Italy should have joined in the sides of these two nations when war broke out in August 1914. She did not. Italy’s experience in World War One was disastrous and ended with the insult of her ‘reward’ at the Versailles Settlement in 1919.

What Italy did was wait and see how the war progressed. On April 26th 1915, she came into the war on the side of the Triple Entente – Britain, France and Russia.

Many socialists had supported the government ‘s stand in keeping Italy out of the war in 1914. The nationalists, however, were horrified. To start with, Mussolini was against the war:

Mussolini was kicked out of the Socialist Party in Italy but many young socialists agreed with Mussolini and left the party and followed him. Therefore, they greeted the news of April 26th 1915, the entry of Italy into the war.

Why did the government want to go to war?

In 1915, Italy had signed the secret Treaty of London. In this treaty Britain had offered Italy large sections of territory in the Adriatic Sea region – Tyrol, Dalmatia and Istria. Such an offer was too tempting for Italy to refuse. Britain and France wanted Italy to join in on their side so that a new front could open up t the south of the Western Front. The plan was to split still further the Central Powers so that its power on the Western and Eastern Fronts was weakened. The plan was logical. The part Italy had to play in it required military success. This was never forthcoming.

Between 1915 and 1917, Italian troops only got 10 miles inside Austrian territory. But in October 1917 came the disaster of Caporetto. In this battle, in fact a series of battles, the Italians had to fight the whole Austrian Army and 7 divisions of German troops. The Italian Army lost 300, 000 men. Though the Italians had a victory at Vittorio Veneto in 1918, the psychological impact of Caporetto was huge. The retreat brought shame and humiliation to Italy.

Mussolini fighting in World War One

By the end of the war in 1918, 600, 000 Italians were dead, 950, 000 were wounded and 250, 000 were crippled for life. The war cost more than the government had spent in the previous 50 years – and Italy had only been in the war three years. By 1918, the country was hit by very high inflation and unemployment was high. But at least Italy had been on the winning side and could expect her just rewards at Versailles………

In fact, Italy got very little at Versailles. The Italian public believed that her leaders there had been humiliated as the “Big Three” (Wilson of America, Lloyd George of Britain and Clemenceau of France) all but ignored the Italian delegation who were seen as secondary figures at Versailles. This heaped further humiliation on the government.

The Italians did not get what they felt had been promised at the Treaty of London and that caused resentment especially at the losses Italy had endured fighting for the Allies. The government came over as weak and lacking pride in Italy. For nationalists, the failure of the government to stand up to the “Big Three” at Versailles was unforgivable.

Serbia in World War One ( Srbija u Prvom svetskom ratu )