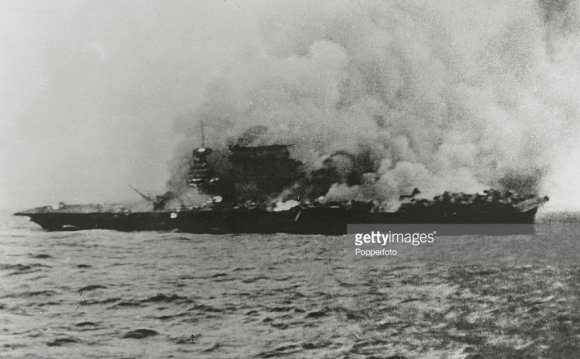 In December 1941 Japan attacked the United States at Pearl Harbor, Hawai'i, causing the U.S. to enter World War II. Over two years would pass until the Allies reached their great turning point in the Pacific War: the defeat of the Japanese at Guadalcanal in February 1943. The Japanese were placed on the defensive as the U.S. began taking strategic bases across the central and southwest Pacific. By the summer of 1944, the Americans were nearing Japan. The final year of the war would bring bloodshed and hardship to the U.S. soldiers, sailors and Marines who liberated territory closer and closer to Japan's home island, and take a tremendous toll on Japanese soldiers and civilians as well.

On June 15, 1944, American forces invaded the island of Saipan, part of the Mariana Islands in the Central Pacific. Securing Saipan was of critical importance to the U.S.; its airfields would put the Army Air Force's new B-29 bombers within striking distance of the main Japanese islands. For the Japanese, keeping Saipan was crucial in stopping the American advance.

In what became known as the Battle of the Philippine Sea, American and Japanese carriers fought a two-day sea and air battle off the coast of Saipan. It would go down as one of the biggest carrier battles of World War II. Japan lost three aircraft carriers and more than 300 planes. On Saipan, the Marines and army faced an enemy well dug-in and prepared to fight to the death. Of the 30, 000 Japanese troops who defended Saipan, less than 1, 000 remained alive when the battle ended July 9.

However, it was the civilian casualties that stunned American troops. As the battle came to an end, large numbers of civilians committed suicide, terrified of being captured by American forces. Japanese government officials exploited the suicides at Saipan to their advantage, calling those who took their lives heroes and encouraging the entire Japanese population to follow suit if the time came. Death before surrender had been the national policy for Japan's servicemen; now it became the national policy for civilians as well.

and his Sixth Army returned to the Philippines by way of the island of Leyte. More than two and a half years had passed since MacArthur had reluctantly abandoned his troops in the Philippines, retreating to Australia, where he had vowed, "I shall return." After he waded ashore MacArthur delivered his famous "I have returned" speech. Offshore the U.S. Navy and the Imperial Navy waged the largest naval battle in the history of warfare. The Battle of Leyte Gulf destroyed the Japanese Navy as an effective fighting force. It was during this battle that U.S. sailors first witnessed the kamikaze attacks that would become commonplace five months later in the battle of Okinawa. As many as sixty-five thousand Japanese soldiers died defending Leyte. More than 15, 000 Americans were killed or wounded.

main Filipino island of Luzon, defended by 287, 000 Japanese. According to historian Donald Miller, this was "the largest army the Americans faced in the Pacific." When organized battle ended after two months, Manila was one of the most thoroughly devastated cities of World War II. The Japanese Navy had blown up Manila's harbor and destroyed the old city. MacArthur's Sixth Army suffered 38, 000 individuals killed or wounded. Despite defeat, stalwart Japanese would continue to fight in the jungles and mountains of the Philippines until the very end of the war. Japan lost a total of 400, 000 lives in the Philippines.

End of World War 2 in the Pacific: Japanese Surrender ...