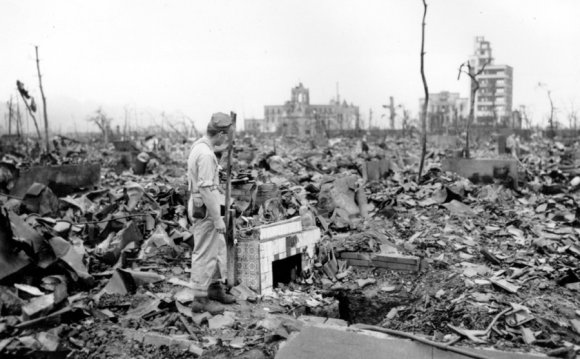 The Aftermath of World War II

The United States emerged from the war with global military commitments that included the occupation of Germany and Japan and the oversight of Allied interests in liberated areas. Almost 13 million Americans were in uniform at the end of the war; over 8 million of them were soldiers. But the impulse was strong to follow the patterns of the past and dismantle this force. Families pressed the government to "bring the boys home, " and soldiers overseas demanded the acceleration of the separation process. American monopoly of the atomic bomb seemed to furnish all the power that American security interests needed. Some air power advocates even argued that the bomb made armies and navies obsolete.

President Roosevelt had died in April 1945, on the eve of victory. The new President, Harry S. Truman, and his advisers tried to resist the political pressures for hasty demobilization. Truman wanted to retain a postwar Army of 1.5 million, a Navy of 600, 000, and an Air Force of 400, 000. But neither Congress nor the American public was willing to sustain such a force. Within five months of V-J Day, 8.5 million servicemen and women had been mustered out, and in June of the following year only two full Army divisions were available for deployment in an emergency. By 1947 the Army numbered a mere 700, 000 - sixth in size among the armies of the world.

Yet too much had changed for the Army to return to its small and insular prewar status. Millions of veterans now remembered their service with pride. The beginning of the Cold War, especially the Berlin blockade of 1948, dramatically emphasized the need to remain strong. The Army had become too deeply intertwined with American life and security to be reduced again to a constabulary force. Moreover, the time was not far off when new conflicts would demonstrate the limits of atomic power and prove that ground forces were as necessary as they had been in the past.

This text has been converted from "A Brief History of the U.S. Army in World War II" published by the U.S. Army Center for Military History.