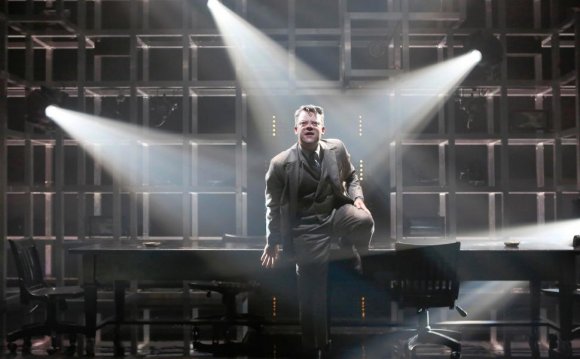 It’s just mid-July, but it’s unlikely that another production number will come along this year as ponderous as the pas de trois in “Atomic, ” an earnest but overwrought rock musical about the Manhattan Project.
The scene involves Hungarian-American physicist Leo Szilard (Jeremy Kushnier, terrific as ever), who conceived the nuclear chain-reaction key to building the atom bomb, and agonized over it, and a Japanese couple. Lights blind. Guitars moan. Szilard punches, kicks and slams the young man and his wife. In ... slow ... motion.
Composer Philip Foxman and his co-lyricists and book writers, Danny Ginges and Gregory Bonsignore, want this moment to put a human face — and fists — on the atrocities of war and the ironic devastation of creation. Unfortunately it’s like a fight from TV’s “Batman.” Directed by Damien Gray, the whole cast, including Euan Morton as J. Robert Oppenheimer, rocks stready. But the show reaches so hard you feel the strain.
“Atomic” runs through Aug. 16 at the Acorn Theatre (410 W. 42nd St.).
James Franco reinvents himself again — this time as an Off-Broadway director — with “The Long Shrift.” Though the play has issues, Franco guides a spare but well-paced production.
Franco’s best move: Casting Ally Sheedy as a mother whose son (Scott Haze, charismatic) does prison time for rape and is reunited with the woman (Ahna O’Reilly) whose accusation put him behind bars.
Playing a mom who sees her son clearly, Sheedy brings a gritty and refreshing directness. She gives a no-B.S. performance — even during some awkward dream sequences.
The drama itself isn’t as balanced. As playwright Robert Boswell chases the murky complexities of truth — a theme worth exploring — the work drifts distractingly between seriousness and schoolgirl silliness. And having a character baldly spell out what the title means gives the audience short shrift.