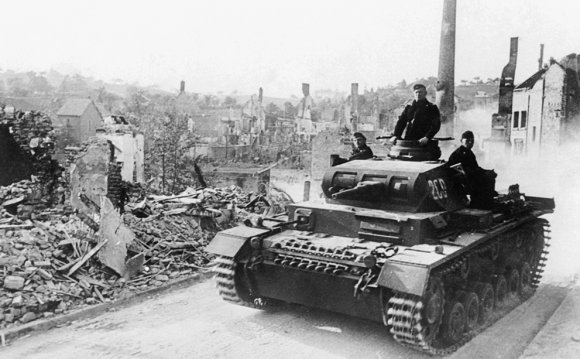 A potentially decisive counterattack by two high quality French armoured and motorised divisions fizzled out into some fierce, but ultimately inconclusive fighting. Under the dynamic command of General Heinz Guderian, a pioneer of armoured warfare known euphemistically as 'Hurry-up Heinz', the German Panzers broke out of their bridgehead. They began to race towards the Channel coast, aided by the German aircraft that ruled the skies.

With the bulk of the Allied forces fighting in Belgium, there was little to stop the German forces as they sliced across the Allied supply-lines. The German spearheads reached the English Channel on 20 May.

Lacking a centrally placed strategic reserve, the Allies tried to pull their armies out of Belgium to respond to the new threat emerging in their rear. And the Germans did not have it all their own way, as French forces under Charles de Gaulle showed how vulnerable the flanks of the German forces were to bold counterattacks.

Then at Arras on 21 May, a scratch force of British tanks and infantry gave a rough reception to Erwin Rommel's 7th Panzer Division. Yet this was all too little, too late. With German forces pushing through Belgium and the Panzers looping up from the south and west, the Allies were encircled. The Belgian army surrendered on 28 May, leaving a gaping hole on the British flank of the Allied forces.

Allied high command seemed paralysed. General Weygand replaced General Gamelin as French commander-in-chief, but it made no difference. Then General Lord Gort, the commander of the British Expeditionary Force (BEF), on 23/4 May took the morally courageous decision to abandon his role in a projected Anglo-French counterattack, and fell back on the Channel ports.

The French, not surprisingly, regarded this as a betrayal, but Gort's decision saved the BEF. Between 26 May and 4 June, a hastily organised evacuation by sea, code-named Operation Dynamo, lifted 338, 000 Allied troops from Dunkirk.

That the German forces failed to press their attack on Dunkirk was largely thanks to grim defence of the Dunkirk perimeter by British and French troops, and the efforts of the much-depleted RAF.

Although as Churchill, who had become Prime Minster on 10 May rightly commented, 'wars are not won by evacuation', Dynamo was a victory of incalculable importance for the BEF. The return of the troops, even without much of their equipment, gave Britain a basis on which to rebuild the Army, sheltering behind the Navy and the RAF. It also strengthened the credibility of Churchill's insistence that Britain would fight on, thus influencing the neutral USA at a time when American aid was vital.