World War Two in the Pacific 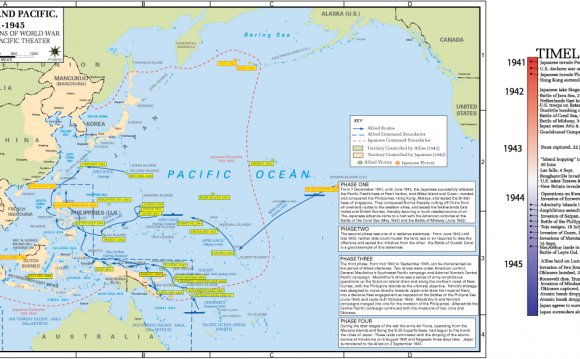 Japanese expansion in East Asia began in 1931 with the invasion of Manchuria and continued in 1937 with a brutal attack on China. On September 27, 1940, Japan signed the Tripartite Pact with Germany and Italy, thus entering the military alliance known as the "Axis." Seeking to curb Japanese aggression and force a withdrawal of Japanese forces from Manchuria and China, the United States imposed economic sanctions on Japan. Faced with severe shortages of oil and other natural resources and driven by the ambition to displace the United States as the dominant Pacific power, Japan decided to attack the United States and British forces in Asia and seize the resources of Southeast Asia.

After the attack on Pearl Harbor, Japan achieved a long series of military successes. In December 1941, Guam and Wake Island fell to the Japanese, followed in the first half of 1942 by the Philippines, the Dutch East Indies, Hong Kong, Malaya, Singapore, and Burma. Thailand remained officially neutral. Only in mid-1942 were Australian and New Zealander forces in New Guinea and British forces in India able to halt the Japanese advance.

The turning point in the Pacific war came with the American naval victory in the Battle of Midway in June 1942. The Japanese fleet sustained heavy losses and was turned back. In August 1942, American forces attacked the Japanese in the Solomon Islands, forcing a costly withdrawal of Japanese forces from the island of Guadalcanal in February 1943. Allied forces slowly gained naval and air supremacy in the Pacific, and moved methodically from island to island, conquering them and often sustaining significant casualties. The Japanese, however, successfully defended their positions on the Chinese mainland until 1945.

Late in 1944, American forces liberated the Philippines and began massive air attacks on Japan. British forces recaptured Burma. In early 1945, American forces suffered heavy losses during the invasions of Iwo Jima (February) and Okinawa (April), an island of strategic importance off the coast of the Japanese home islands. Despite these casualties and suicidal Japanese air attacks, known as Kamikaze attacks, American forces conquered Okinawa in mid-June 1945.

On August 6, 1945, the United States Air Force dropped an atomic bomb on the Japanese city of Hiroshima. Tens of thousands of people died in the initial explosion, and many more died later from radiation exposure. Three days later, the United States dropped a bomb on the Japanese city of Nagasaki. Approximately 120, 000 civilians died as a result of the two blasts. On August 8, the Soviet Union declared war on Japan and invaded Japanese-occupied Manchuria.

After Japan agreed to surrender on August 14, 1945, American forces began to occupy Japan. Japan formally surrendered to the United States, Great Britain, and the Soviet Union on September 2, 1945.

World War 2 The War in the Pacific 3

World War 2: War in the Pacific