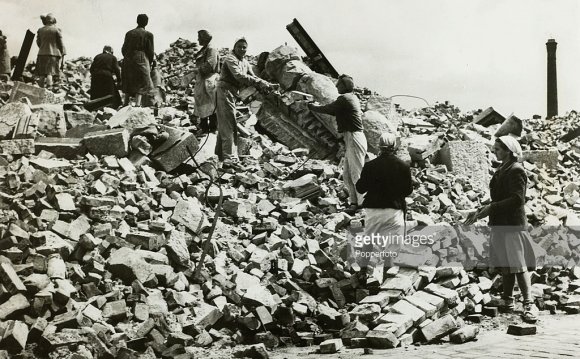 A new 18-minute video and interactive Web site give perspective on the loss of human life across the globe during World War II. View the interactive version at fallen.io. (Courtesy of Neil Halloran)

Seventy-one years ago today the U.S. Army established a temporary cemetery in Europe. It was needed to bury thousands of soldiers who were killed in the D-Day invasion that had started two days earlier on the beaches of France. The assault was a daring effort to help defeat the Nazis that would ultimately lead to the deaths of tens of thousands of Americans.

The number of deaths worldwide in World War II — at least 60 million, according to the National World War II Museum — have not been seen in any conflict since. The cemetery in France eventually became the The Normandy American Cemetery and Memorial, one of many battlefield cemeteries at which American troops were buried overseas.

A new 18-minute video and website gives new perspective on the losses in the war. “The Fallen of World War II” is an interactive documentary visually explaining the deaths — and it has generated huge attention since it was published on Memorial Day. It was written, directed and coded by Neil Halloran, a filmmaker who is amazed at the attention it has received.

Halloran said the video has been viewed about 3 million times in just a few weeks, with many new viewers finding it over the weekend, as the 71st anniversary of D-Day was marked. He initially started research for the project while working on a documentary about U.S. airstrikes from World War II to the present, but wanted to capture the staggering number of fatalities of the war.

“I got sucked into World War II, because the numbers are so huge that I couldn’t get away from it, ” he said in a phone interview. “It was going to be a small online timeline, but it just grew.”

Halloran said it was created out of computer code, rather than using a video tool, because it gave him more control of the choreography of the statistics as they were presented. Each body shown in the graphics represents a thousand deaths, with comparisons made between civilian and military fatalities and all of the countries involved.

Halloran said he is interested in expanding the project into a series. Other episodes would focus on topics ranging from drone strikes to peacekeeping efforts overseas, with the data telling the stories.